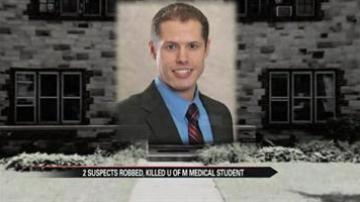 ANN ARBOR, Mich. -- New details have been released in the death of a University of Michigan medical student.

Police say 25-year-old Paul Dewolf woke up during a break-in and was shot when he tried getting out of his bed.

According to the Detroit Free Press the high school valedictorian and active duty Air Force Lieutenant was asleep in his basement room in a fraternity house on the night three men broke-in in July.

One of the men tried to hit Dewolf with the gun, but it fired and hit him in the neck.

Two of the three have since been charged in his death.