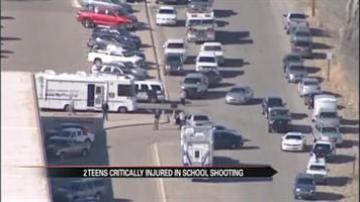 ROSWELL, N.M. -- Two teenagers are in critical condition after a school shooting at a middle school Tuesday morning in Roswell, New Mexico.

Investigators say a suspect is in custody but will not elaborate any further.

The teenagers that were shot are said to be just 13 and 14-years old.

Both were airlifted to a nearby medical center.

Students inside the school were bused to a nearby mall where their parents were able to pick them up.