2-Year-old boy in serious condition after being beaten 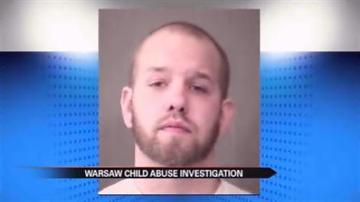 WARSAW, Ind. -- A 2-year-old boy is hospitalized after police say his mother’s boyfriend beat him with a kitchen utensil Thursday afternoon. The child suffered a skull fracture and a serious injury to his groin area.

Right now Bradley Waikel, 24, is behind bars and facing two felony charges for neglect and battery to a child that resulted in serious bodily injury.

The boy is still in serious condition. His injuries were so severe that he was air lifted to Riley Children's Hospital in Indianapolis.

"Very much it upsets us," says Neighbor Jill Bartley.

Bartley says she was sick to her stomach when she heard her neighbor’s 2-year-old boy was allegedly beaten by his mother’s boyfriend.

"He is two years old. He didn’t even know why, why are you doing this to me," says Bartley.

Neighbors say the mother left the boy with her boyfriend while she went to a job interview. When she got home she found the boy unconscious on the floor. The boy was then rushed to Kosciusko Community Hospital by his mother.

"There was actually two major injuries," says Sergeant Chad Hill with the Kosciusko County Sheriff's Department. "One to the back of the head, that was constituted as a skull fracture, as well as a secondary injury to the groin area that was quite extensive as well."

The boy was air lifted to Riley Children's Hospital to be treated for his injuries.

Waikel is currently being held at the Kosciusko County jail on $100,000 bond.