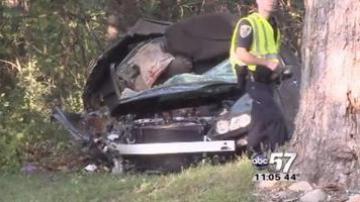 Police say the woman and the driver, her 17-year-old cousin, were driving northbound on Oak Road when the teen suddenly lost control of the car, hitting two trees and flipping the car on its side.

The 17-year-old girl was rush to Memorial Hospital, in South Bend, to be treated for non-life threatening injuries. However, the passenger was pronounced dead on the scene.

Right now police are still trying to piece together what caused the deadly accident. Investigators say there were no witnesses and that both women had been wearing their seat belts at the time.

Police have called in a FACT team to assist in the investigation and say they will be looking at several other possible factors including speed and whether the driver was texting while driving.

"We have called in a FACT team to help us with the investigation, but we do not believe that drugs or alcohol were a factor at this time," said Lt. Matt Blank with the St. Joesph County Sheriff's Department.

Although police will be looking into how fast the teen was driving, investigators say they have not had an issue with speeders on the road here in the past.

"This area is not a problem area. I am sure that from time to time you are going to have people come down this road going a little too fast like you would in any other area," said Blank.

Investigators say the 20-year-old passenger, who died in the crash, lived just down the street from where it happened.