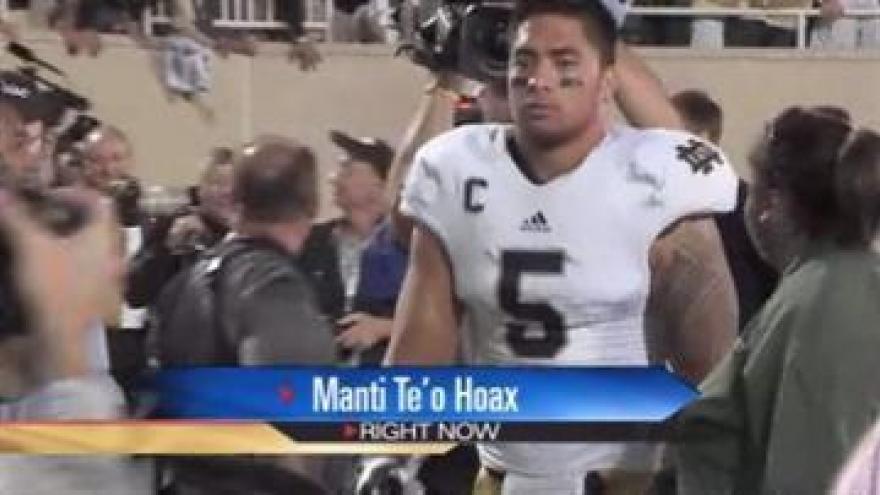 NOTRE DAME, Ind. -- He was known as No. 5 and the face of the 2012 undefeated Notre Dame Football Season, but the unexpected cat-fishing tale of Manti Te'o changed many people's perspective of the linebacker in 2013.

If you weren't already a Te'o fan in the Fall of 2012, you probably became one, after he lead his team to a major win over Michigan State less than a week after his grandmother and girlfriend passed away.

In January of 2013, nine days after Notre Dame loss to Alabama in the National Championship, that story took a drastic turn.

“The single most trusting human-being I’ve ever met will never be able to trust the same way again in his life," said Notre Dame Director of Athletics Jack Swarbrick in a press conference on January 16th.

There the administrator announced Te'o had been the victim of an elaborate online hoax. The linebacker's girlfriend, Lennay Kekua, believed to have passed away from leukemia, never existed.

The news spread like wildfire with headlines reading: Blarney, Duped, and Hoax.

Many waited for Te'o to break his silence and explain how this could have happened.

At the time he was training for the NFL draft at the IMG Training Academy in Florida.

There he spoke off-camera to ESPN's Jeremy Schaap for the first time.

Schaap: “For the record once again were you in any way part of this?"

Te'o went on to tell Schaap about a phone call the linebacker received on his awards tour in December of 2012 that first revealed signs he'd been tricked in his online relationship.

Later Te'o and his parents sat down for an exclusive interview with Katie Couric.

He shared phone records with the TV host of long conversations with Kekua and even voice mails from her.

“I’m getting ready for my first session and just want to call you to keep you posted. I miss you, I love you. Bye," said "Lennay" in a voice mail.

Behind that sound and Kekua's online persona was actually Ronaiah Tuiasosopo. He sat down with Dr. Phil to explain why he decided to come clean.

“I wanted to end it because after everything I had gone through I finally realized that I just had to move on with my life and I had to get, you know, my real, me Ronaiah, I had to start just living and let this go," Tuiasosopo told Dr. Phil.

There's no doubt Te'o's life changed as the NFL draft approached in April.

Many feared the recent revelation would hurt his stock.

The San Diego Chargers took Te'o as the 38th pick overall in the second round.

“I think after the couple months I’ve been through I think I’m pretty prepared," he said in a press conference after being selected.

In California he added a zero to his jersey and became No. 50. He recorded 61 tackles his rookie season.

The chatter around the hoax is hard to escape, but recently Te'o told the Associated Press he's ignored the flak of his fake girlfriend and that has not impacted his start in the NFL.