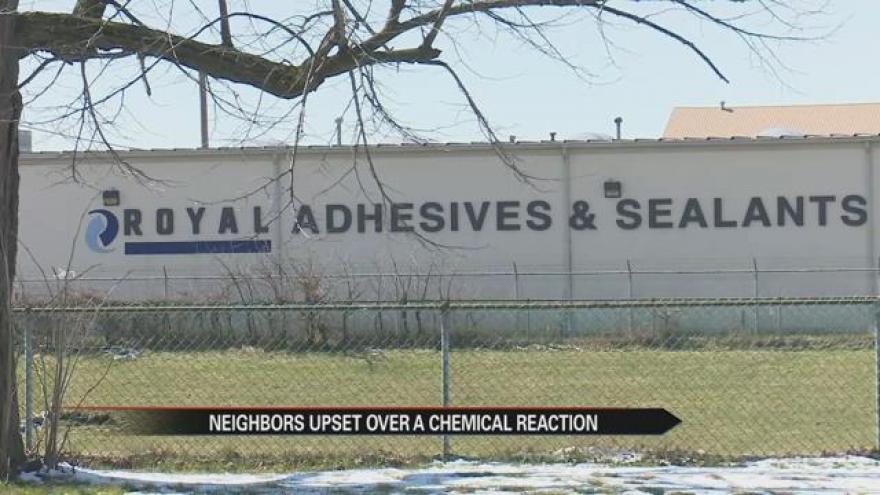 It's been less than 24 hours since irritant gas filled a South Bend neighborhood, and neighbors are wondering why they had to learn about what was going on through social media.

Just after bedtime, a pungent odor and the sound of sirens, woke up Courtney Fulkerson.

"All of the sudden there were ambulances and fire trucks going by," she recalls.

The mom of four knew something was wrong.

"You could smell something really nasty," she explains.

Smoke was billowing out of the Royal Adhesives and Sealants Factory, just across the street from Fulkerson's home. They thought the factory was on fire.

It wasn't on fire, but there was a chemical reaction. A reaction that filled the air with irritant gas and smoke.

"The contents inside the building, and the system used to vaccuate the vapors off the product malfunctioned," he says.

But nobody told Fulkerson, or her other neighbors, what was going on. She saw it via social media.

"I had to look on Facebook and they said there was a chemical explosion," explains Fulkerson."

She didn't know what to do.

Rumors started spreading, saying the neighborhood had to be evacuated.

But Capt. Ellis says there's a process they follow.

"Every incident is going to be different," he explains. "That's why firefighters and emergency responders always refer to this guideline."

A guideline book that they refer to to keep everyone safe, and it worked.

Capt. Ellis urges if this should happen again, to stay inside.

"I know a lot of people want to go outside and watch and see what's happening." he says. " But if you smell something and it's not good, it's probably a good idea to go inside the house, close the door, and then wait until authorities make contact."

But the neighbors just want the lingering odor gone as soon as possible.

"It stinks," says Fulkerson with a laugh.