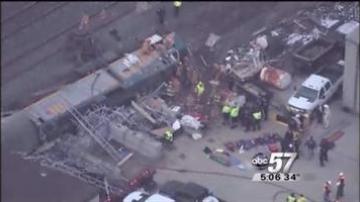 BURLINGTON, Ontario. – Three people are dead after a passenger train derailed in Canada.

All six cars derailed as the train headed from Niagara to Toronto. Officials say two train engineers and a trainee were killed.

At least 45 people were sent to hospitals. Police say one person had a heart attack.

The train took a different track, and hit some parked freight cars.