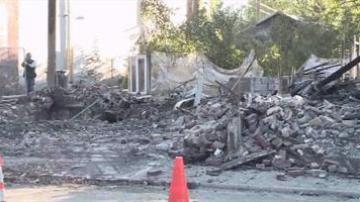 ELKHART, Ind. --  Three people had to be flown by helicopter to the burn unit in Fort Wayne late Saturday night after police said a fire broke out on the corner of East and Division Street just before 2:00 a.m. at the old Tony's Shoe Shop.

An apartment complex and two businesses were engulfed in flames.

The head nurse at the St. Joseph Hospital burn unit in Fort Wayne told ABC57 all three victims are currently in critical condition.

It is hard to believe there used to be a building here.

All that is left now is rubble, after a fire ripped through the old shoe repair shop, spread to the Youth Christian Center and the apartment complex next door.

Neighbor Michelle Peralez said it started with an explosion.

“Around 2 a.m. in the morning we woke to a crash.  My husband jumped out of bed.  He woke me up and looked out the window and said there was a fire at the neighbors house,” said Michelle Peralez

Firefighters raced to put out the flames.

“They were shooting water from the Lifeline Center to this house to the other building.  They were everywhere,” said Peralez.

Three people had to be rescued from the burning apartment complex.

“They were giving him oxygen.  They said he had a second degree burn.  You could tell, because he did not have a shirt on and he looked very helpless,” said Peralez.

The victims had to be flown by helicopter to the burn unit in Fort Wayne.  One firefighter was also injured and taken to a nearby hospital.

Peralez said she will be checking her smoke detectors and she never thought this would happen in her neighborhood.

“It is scary you know.  It hits home.  You never know.  It could happen especially in the neighborhood, so it just gives you a wake-up call,” said Peralez.

So far the Red Cross has put four families up in hotels with food and clothes.