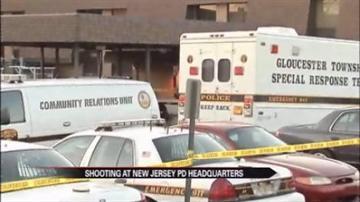 Authorities say it  started when a man was brought to the station on domestic violence charges. They say a struggle occurred while he was being booked. He got his hands on a gun and shot at officers.

"As a result the officers returned fire and suspect is deceased at this time in the police station. Investigation is being handled," said David Harkins, Gloucester Township Police Department. "I saw them throw somebody into an ambulance. It was very, very quick. Police officers jumping into the ambulance and then taking off very quick."

One officer was hit just below his bullet proof vest and two others were grazed. All are expected to be okay.