3 semi accident stalls traffic on I-94 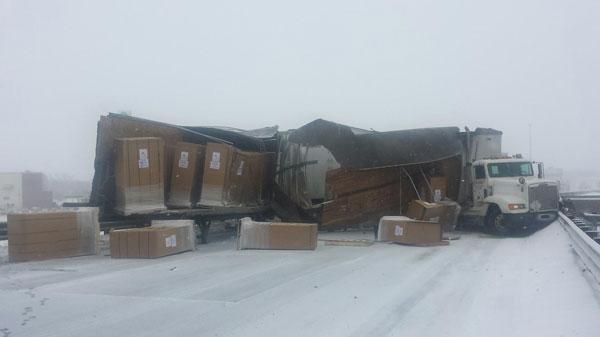 Three semis were involved in a crash on I-94 at mile marker 29 in the eastbound lanes Wednesday morning. The road was shut down for several hours.

Police said a semi trailer was sliced in half and split open when another truck struck the guardrail of an overpass.

The accident happened near the Pipestone Road exit in Benton Township.

The accident caused a fuel leak, which delayed attempts to reopen the road.

There were only minor injuries in the accident.

The eastbound lanes reopened around 3:15 p.m., almost six hours after the accident happened.

A worker at a nearby truck stop says a customer told her what happened.

“The customers came inside and were like ‘Did you see that!!?” We looked outside and what happened was the one that got separated, he jackknifed, one hit that and ripped his tractor off, and then the one that got ripped off, got hit from behind, and all his product went flying on the highway,” said Cami Irwin.

Blowing snow is causing low visibility on all roads in Michiana, especially I-94. Drivers are urged to stay home and off the roads if at all possible.