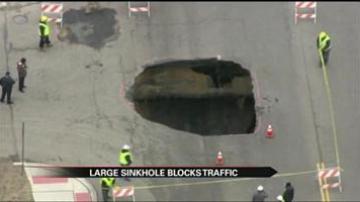 The nearly 30-foot-wide hole forced crews to shut down the road in both directions.

A contractor with the Detroit Water and Sewage Department was checking a sewer line for ruptures when crews noticed the pavement was buckling.

They believe sewer lines that were under the street eroded and caused the pavement to collapse.