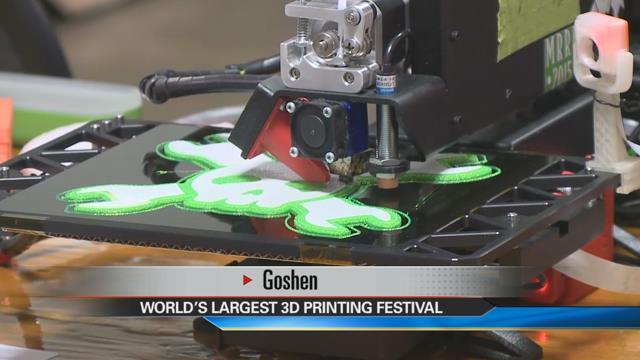 The festival started back in 2012 by a group of printing enthusiasts in internet chat rooms.

It is the largest open source 3D printing festival.

“You’ll see every kind of DIY 3D printer you can imagine, right here at this festival,” said Steve Wygant, owner of SeeMeCNC.

People from all over the world came to attend this year’s 3D printing festival to showcase their talents.

“We’ve come over from England, we’re E3D-Online.  We do material science, we do hot end development, we do basically anything that goes inside the 3D printer that’s a challenging problem we love to get our teeth stuck into,” said Joshua Rowley, Design Engineer at E3D-Online.

The festival is also a great way to network and showcase any upcoming products that the enthusiasts want to sell.

“We’ve got some interesting new products coming,” said David Lamb, E3D-Online sales and business manager.  “They should be coming out in the not too distant future.”

Drones, angels, and even prosthetic hands are just some of the many things you’ll see printed at the event.

Even Goshen middle and high school students joined in on the fun.  Including the EFF 5 Robotics Team. They went 2nd in state earlier this year using their robot made mostly from their 3D printed designs.

“It’s been really fun; I’ve seen a lot of really cool things that have been 3D printed,” said Griffin Hetler. “I’ve gotten to talk to people about the robotics team, it’s just been really fun.”

“It’s been really fun for me, I got to talk to the guys at E3D Online about their Big Box 3D Printer that just came out,” said Jayson Margush.  “I’ve been talking with a lot of people at SeeMeCNC about problems with my 3D printer.  It’s just opened up a lot of opportunities for me to learn about 3D printing.”

“I’ve had a lot of fun and I’ve been able to learn a lot about 3D printing,” Alex Wiseman said.  “There was a booth here that talked about 3D printed prosthetics which was really interesting.”

“I’ve had a lot of great help with working on my reprap printer and getting it working and functioning so that’s been wonderful,” said Daniel Sailor.

The Michiana area has been seeing the benefits of 3D printing.

“There’s lots of colleges and universities nearby us here in the Michiana area,” said John Olafson, Co-Organizer of the Midwest RepRap Festival.  “A lot of them have used 3D printing in the educational classes such as electronic engineering, mechanical engineering.  Getting more into bio 3D printing, healthcare.”

An example for healthcare would be prosthetics.

“I’m a volunteer for an organization called E-Nable,” said Aaron Brown.  “We’re a worldwide group of volunteers, we use 3D printing to print and donate assisted hand devices to kids all over the world.”

This year’s RepRap Festival and sponsors are giving it a round of applause.

“SeeMeCNC is proud to support and to sponsor this year’s Midwest RepRap festival,” Wygant said.  “Hopefully we’ll see everybody out here next year.”