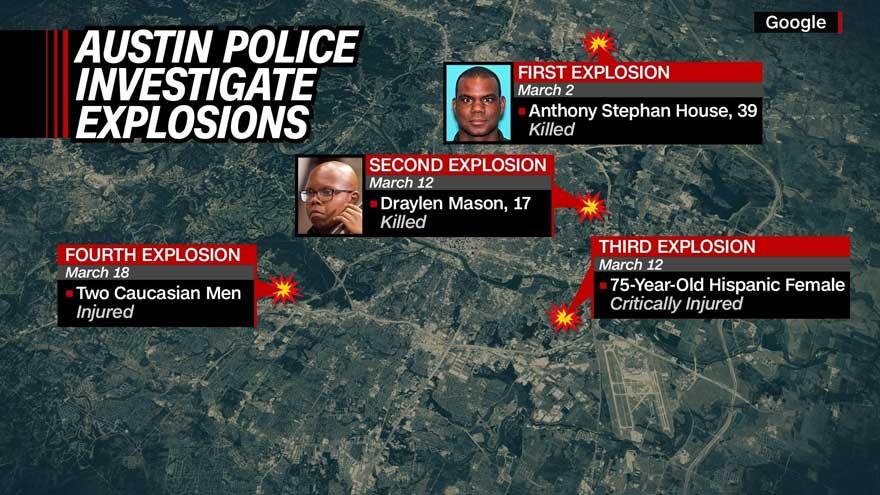 (CNN) -- Four bombings in 17 days have left the Texas capital on edge, as Austin police are warning the public not to take chances: If it looks suspicious -- whether it's a package, box or backpack -- do not approach it.

While authorities are offering a six-figure reward for information leading to an arrest in the bombings, which have killed two people, the latest attack Sunday seemed to follow a different pattern.

Where the first three package bombs were left on people's doorsteps or porches and killed or injured minorities, the most recent bomb Sunday was left on the side of the road in a predominantly white neighborhood and may have been triggered by a tripwire.

Still, authorities say "similarities" among the bombs have investigators operating under the belief all the bombs are related.They suspect a serial bomber is behind the violence. Here's a look at what police say about each attack:

The first blast was reported about 6:55 a.m. local time in the Harris Ridge neighborhood of north Austin. It was a powerful device, essentially a pipe bomb, in a normal-sized delivery box, which would be a theme for the first three bombings.

Anthony Stephan House, 39, died from injuries he suffered after opening the package.

His LinkedIn profile said he was a senior project manager for Texas Quarries and participated in commercial projects throughout the state, including at University of Texas properties and the Phillips 66 headquarters in Houston.

The first of two bombs that day, it was detonated around 6:44 a.m. in the city's East MLK neighborhood. Like the bomb 10 days earlier, it had been left at the victim's home and it appeared to have been hand-delivered, rather than by any courier service. The bomb detonated when the victim brought it inside and opened it.

It killed 17-year-old Draylen Mason, a promising student who played stand-up bass in a youth orchestra and was taking college classes while in high school. A woman injured in the bombing suffered non-life-threatening injuries. Neighbors saw her in the yard covering her face with her hands and brought her blankets because the blast had ripped off some of her clothing, said Anne Marie Castillo, who lives five houses down from Mason.

Mason and House were both African-American.

"(Mason) was a young guy with so much future and potential. We talked a lot about college. He hugged me every morning before class," Austin Community College professor Samuel Osemene said.

Police were processing the scene at the East MLK bombing when another bomb erupted in the Montopolis neighborhood of southeast Austin, a few miles from Austin-Bergstrom International Airport.

The midday blast left a 75-year-old Hispanic woman badly injured, spurring police to leave open the possibility the bombings are hate crimes, given the victims were, at this point, all minorities.

"We believe that the recent explosive incidents that have occurred in the city of Austin were meant to send a message," Austin Police Chief Brian Manley said.

This was the first explosion to break with the pattern of doorstep deliveries. Instead, this bomb was left on the side of the road in the upscale Travis Country neighborhood of southwest Austin. It could have maimed any passerby, police said.

Two white men, a 22- and 23-year-old, who were walking alongside the road when the bomb detonated, were taken to a hospital with serious but non-life threatening injuries.

Despite the new modus operandi, Manley said investigators believe the bombings are connected. Hundreds of federal agents are now involved in the investigation.