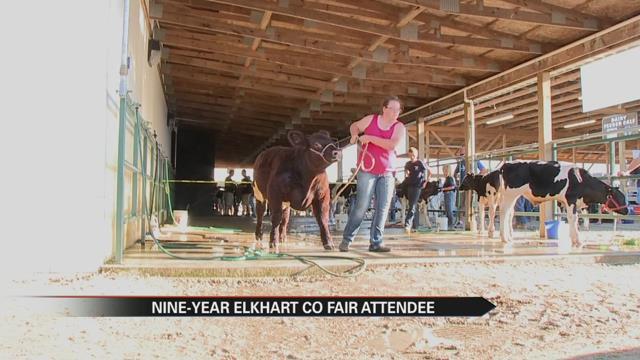 Over the years, the Elkhart County 4-H Fair has helped shaped young lives through leadership and community involvement.

Henderson is in her ninth year as a 4-H participant.

“4-H has allowed me to meet new members, showed me I have a bunch of life skills that I didn’t realize I had until I became a 4-H member,” said Henderson.

For Henderson it was the logical choice from an early age.

Her biggest supporter and fan?

“I’m very proud of her. We don’t have a barn at our house. So she has to go to three different places and probably drives 30 miles for morning chores and night chores and gets it all done pretty much by herself,” said Jill Henderson.

Robert Kelly is an extension educator with the Elkhart County Fair and has worked with Henderson for several years.

“She manages three different species of animals and show them all and take care of them. She does an awesome job of that,” said Kelly.

Don’t think for a minute Brandi is content just entering her final year.

“My upcoming goal is to win round robin,” said Henderson.

A chance for Brandi to show all of her animals in the large animal category.

10 years after the journey started, Brandi is thankful to take away the true meaning of 4-H: Leadership, friends and family.

“4-H has taught me to be a good person and show how the younger members how they should act,” said Henderson.

Brandi says she wants to pursue a career in Agri-business and follow in her mom’s footsteps.