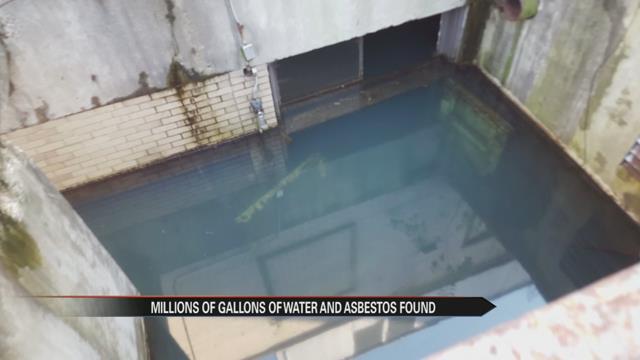 According to the Berrien County Treasurer, 4-million gallons of ground water is sitting in the basement of the old Mercy Hospital in Benton Harbor. There are concerns that the water is contaminated.

Environmental consultants are testing the water and the results should be ready in two weeks.

The old Mercy Hospital might look like a lost cause, but Berrien County Treasurer Bret Witkowski is still trying to save it.

Witkowski said, “Our goal is to try and save it because it’s such a huge part of the city, both in history and in tax revenue.”

Ideally, the county wants to find a buyer who will agree to pay the back taxes and find a remedy for its latest issue.

Witkowski said, “It has filled up with water because the pumps have shut off because there’s not electric and there’s about 4-million gallons of water sitting in the basement.”

This abandoned building is also filled with asbestos, another contaminant that concerns nearby residents.

Williams said his mom worked at the Mercy Center as a nurse when it was operational 5 years ago.

He's worried about the monetary repercussions on taxpayers after the developer walked away from the property.

The environmental consultant said it would cost $187,000 to clean up the water and demolish the building if they don't find a buyer.

Williams said, “It’s going to take a lot of money, and I don’t want it coming out of my pocket!”

At this time officials don't believe the building is at risk of caving in.

Williams said, "It’s kind of a messed up situation.”

The county treasurer said it's a safety hazard inside and the entire place has been stripped of copper and scrap metal.

Witkowski said the water has probably mixed with oil from old burners.

They can't pump it into Benton Harbor's sewer system because the cost would be astronomical and it would overload the system.

Officials are estimating that it will take 18 months to come up with a solution if they don't find a buyer.