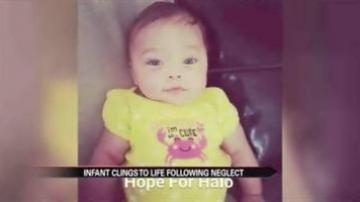 SOUTH BEND, Ind. -- A 22-year-old man has been charged with neglect of a dependent after his 4-month-old daughter was taken to the hospital in critical condition.

Four month old Halo Stutzman is in critical condition and on life support.

Residents said the family just moved to Dubail Street a couple months ago.

Her father, Bryan Michel, is preliminarily charged with neglect of a dependent.

"I wouldn't know what to do, I couldn't imagine that," said Johnson.

Hours later, the house was surrounded by police.

"We heard the sirens and that's what drew our attention you know. Police officer ran in the house holding his gun but didn't have it drawn," said Brenda Barnes.

Barnes says she had no idea Halo was in danger.

Investigators say the infant was not breathing when they got to the scene.

As a mother herself, Barnes' heart sank for the baby.

"He was holding her like this, rushing her to the ambulance. A police officer escorted them to the hospital," said Barnes.

Not long after that, detectives arrested Michel.