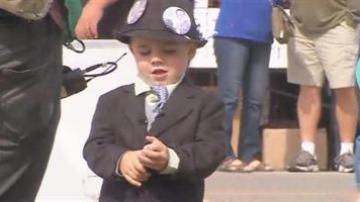 DORSET, Minn. — He may be only four years old, but he's already got his priorities straight as he begins his second term in office as mayor.

Yes, he may only be four years old by Robert "Bobby" Tufts was recently elected to his second term as the mayor of Dorset, Minnesota, a small town of about 30 people.

Dorset has no city government and the position is just for fun.

Money raised from the mock election goes to the "Taste of Dorset" event.

And Mayor Bobby has also raised hundreds of dollars for the Ronald McDonald House charity.