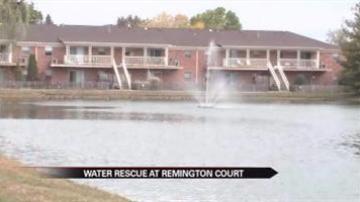 Cathy Gee said the pond there is usually peaceful, but on Tuesday, it was a chaotic scene.

"I went to the window and looked and I seen a small child floating face down in the pond,” said Cathy Gee.

Apparently, the 4-year-old’s mother turned away for just a minute and that's when Gee said the little boy snuck out the sliding glass door.

"When the mother came out she said she was on the phone for a second and she said it was just a minute that she turned her back,” said Gee.

Luckily, Gee did not wait a minute. She jumped right into action.

"We pulled him in by his leg, he was blue, he was unresponsive, and he was shaking,” said Gee.

"I threw him over my arm and pumped on his stomach and he spit water up,” said Gee.

Paramedics showed up and took the young boy to Memorial Hospital for observation. Gee said she did not know quite what to do in this situation, but she was happy to help.

Gee said the 4-year-old’s parents were beyond thankful.

"She could not say enough “thank you's” and there was no need for a thank you.  I would have done it for anybody,” said Gee.

On Tuesday night, the little boy was at home resting.  His mom told ABC 57 that doctors said the boy will have no long-term effects from being under the water.

Police said the boy’s parents will not face any charges.