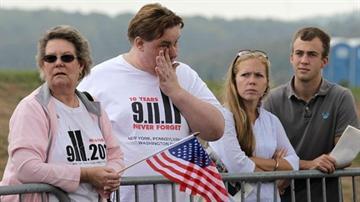 As guests entered the Flight 93 memorial dedication ceremony in Shanksville, Pa., a brass quintet dressed in white Navy uniforms performed solemn songs on stage around a basket of white roses.

No one was sitting outside the memorial selling t-shirts or snacks. Instead, the town is in quiet remembrance, paying their respects to the 40 people who died on September 11, 2001, when United Airlines Flight 93 crashed in a field in Stonycreek Township, just north of Shanksville. The hijackers intended to crash the plane into the Capitol building or the White House in Washington, D.C., but passengers fought back and caused the plane to crash early to thwart the attack.

The flag that flew over the U.S. capitol on September 11, 2001 was brought to Shanksville shortly thereafter to fly over the site of the Flight 93 crash, while workers looked for survivors in the wreckage. Today, that flag was raised once again at the dedication ceremony as a female soldier sang the Star Spangled Banner.

The design of the memorial site is understated but natural. A stone wall with the names of the 40 victims stands next to a field of grass and yellow wildflowers. Trees line the walkway next to the wall.

"Each of them is an American hero," Jon Jarvis, Director of the National Parks Service, said of the 40 victims.

As each name was read, two bells were rung. The reading of the names included "an unborn child."

A bagpipe performance of Amazing Grace followed the reading of the names. Grammy-award winning singer/songwriter Sarah McLachlan sang "I Will Remember You."

"In the distance of a decade, 9/11 can feel like part of a different era," said former President George W. Bush. But for the families, "that day will never feel like history. The memory of that morning was fresh, and so is the pain."

"One of the lessons of 911 is that evil is real, and so is courage," Bush added. "Americans are alive today because the passengers and crew chose to act, and America is forever grateful."

"There has always been a special place in the common memory for people who deliberately, knowingly, certainly laid down their lives for other people to live," said Former President Bill Clinton. "Ordinary people, given no time to decide, did the right thing...I hope and pray to God that people will remember this."

Vice President Joe Biden said passionately that the American spirit cannot be defeated, no matter what tragedy or hardship we face.

"And so we stand where it began," Biden said. "We think of them. We think of our nation. We think of our history. We think of the future. And we think of it, because of them, with a confidence, knowing that ordinary citizens will continue to stare down fear, overwhelm evil, and bring forth hope where there seems to be none...that heroism is who we are, and that courage lies deepest and beats loudest in the heart of this nation."

President Obama and the first lady will visit the site tomorrow for the second phase of the dedication ceremony.

On Monday, three coffins filled with unidentified human remains from the crash will be buried at the memorial site in a private funeral service for family members.

In the last decade, nearly 1.5 million people have visited the memorial site. They are greeted by volunteers who retell the story and talk about the heroic passengers and crew members of Flight 93.

President Clinton pledged to work with House Speaker John Boehner to raise the $10 million still needed to complete the memorial.

The crowd applauded as the white sheets draped over the 40 stone panels were taken away. The brass quintet played a slow America the Beautiful as the former presidents and Biden walked along the panels, looking at each name.