40Th anniversary of Roe vs Wade 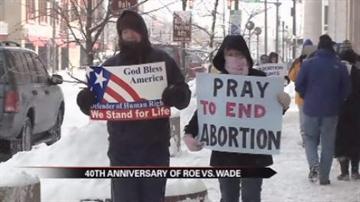 The 1973 decision prompted a nation-wide debate over a mother's rights which still continues.

About 30 Pro-Life demonstrators marched outside the federal courthouse in South Bend on the anniversary.

"I think it is pretty impressive given the temperature and its quite a turnout given this kind of temperature to show their position on this matter," said John Connaughton, St. Joseph County Right to Life.

ABC57 did not  find any "pro-choice" supporters at the courthouse Tuesday.