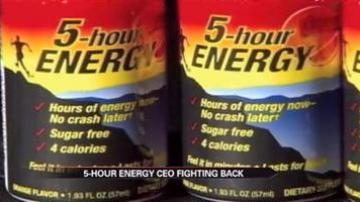 The CEO of 5-Hour Energy said that the only way to get by his product if is if it is abused.

He said that the 13 deaths and 33 hospitalizations reportedly linked to 5-Hour Energy were not because it is dangerous.

He said those who got sick abused the use of the two ounce bottles.

Those two ounces are equivalent to two eight ounce cups of coffee and nearly six Cokes.

“If you had ten cups of coffee in an hour, I think you would end up in the hospital,” said Manoj Bhargave, CEO of 5-Hour Energy. “That would be a really dumb thing to do.”

The latest of which is an October claim of sudden cardiac arrest, fatigue and loss of consciousness.