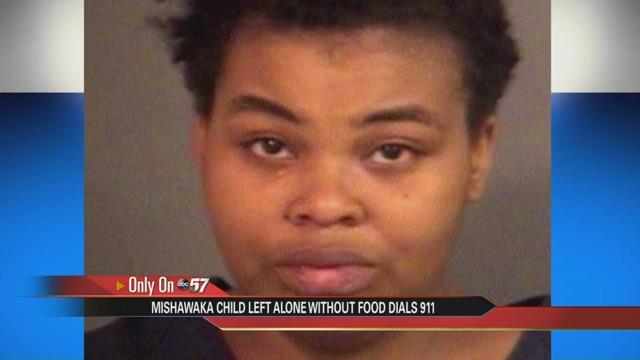 A 5-year-old boy in Mishawaka dialed 911 requesting police help because he was hungry and scared.

The boy's mother, Darnisha Robinson, was arrested on Friday on preliminary charges of child neglect after police found her 5-year-old son and her 10-month-old baby alone in their apartment without food.

A neighbor said it was an upsetting scene to come home to in Pin Oak Manor on Friday morning.

“The little boy called 911 because he was hungry and he didn't know what to do. And as I was actually standing there, I watched the cops bring McDonalds to the little boys and feed them,” said neighbor Desirae Nichols.

Ken Witkowski, the Chief of Police in Mishawaka, pulled up the incident report from his officers. He said they reported the apartment was in terrible condition.

According to the police report, the children had been in the home for more than four hours without an adult.

Witnesses said Robinson eventually showed up to the scene and Child Protection Services was called to investigate.

“Some of them are family guys or women and they have children at home so I think it strikes inside," Witkowski said. "I think it brings out some kinds of heart-felt feelings.”

Nichols said as a mom she's upset about what happened.

“I think the cops handled the situation the best possible way they could. They were definitely heroes in the situation," she said.

Nichols showed ABC57's Alexandra Koehn pictures of the children playing with cops while other officers took their mom into custody.

“The cops brought the boys over to the side and brought transformer toys, sponge bob toys, to try and distract the boys so they didn't have to see their mother get taken away,” Nichols said.

ABC57 submitted a Freedom of Information Request to obtain the audio from the 911 call made by the 5-year-old but that request was denied because it's an ongoing investigation.

Robinson reportedly bonded out of jail and the prosecutor is reviewing the case.