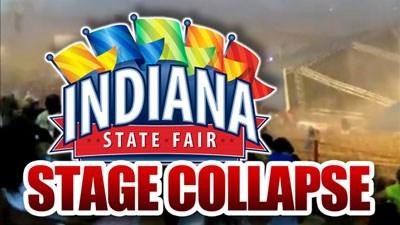 (CNN) -- A $50 million settlement has been reached in connection with the deadly collapse of a stage at the Indiana State Fair, a lawyer for injured survivors and relatives of those killed said Friday.

The incident occurred August 13, 2011, when a strong storm packing winds estimated by the National Weather Service of 60 to 70 mph rolled through just before Sugarland, the country music duo of Jennifer Nettles and Kristian Bush, was set to perform.

Authorities took the stage to warn the crowd to seek shelter at one point, due to the rough conditions. Four minutes later, speakers and metal scaffolding fell into the "Sugar Pit," a section usually occupied by Sugarland's most ardent fans.

Five people died soon after the collapse, with two more succumbing later to their injuries. Scores more were injured and survived.

The $50 million settlement reportedly includes $11 million that had been previously paid out by the state of Indiana. It also "resolves the claims arising from the seven deaths and over 58 injuries against 19 of the 20 defendants in the case," according to Kenneth J. Allen, whose firm represented many of the victims and the families of those killed.

Allen said the terms of how the $50 million will be distributed are being kept confidential, but noted that "all of (his) clients are gratified to reach a conclusion and pleased by the settlement."

He also noted a historical distinction of the settlement: "For the first time in the state of Indiana -- and to our knowledge in the U.S. -- a lesbian widow has received a settlement for the wrongful death of her wife."

Allen was speaking of Christina Santiago, a well-known figure in Chicago's LGBT community who died in the collapse. Santiago's domestic partner and executor, Alisha Brennon, will receive compensation as her surviving spouse.

"It's a legacy particularly befitting of (Santiago) and I'm sure she's proud of it," said Allen.

The settlement was reached with 19 companies.

There's still a case out against one remaining defendant: ESG Security -- a company that employed a guard who was among those killed -- that "will likely go to trial in 2015," Allen said.

Two investigative reports released in spring 2012 found that the scaffolding was not up to standards and the Indiana State Fair Commission did not have adequate emergency planning in place.

The findings were presented by representatives from the firm and officials from Witt Associates, a public safety and crisis management consulting group.

At the time, then-Indiana Gov. Mitch Daniels promised to implement the reports' recommendations even as he insisted his state fair wasn't much different from many others.

"It's ... now clear that most, if not all states, have been deficient in this area and have much to learn from this tragedy," Daniels said then in a statement.

Earlier that year, the Indiana Department of Labor announced penalties totaling $80,800 following a worker safety investigation into the collapse.

The largest fines -- totaling $63,000 for what the agency said were three "knowing violations" -- were levied on Mid-America Sound Corp., which built the stage structure and leased it to the fair.

CNN's Kevin Conlon and Carma Hassan contributed to this report