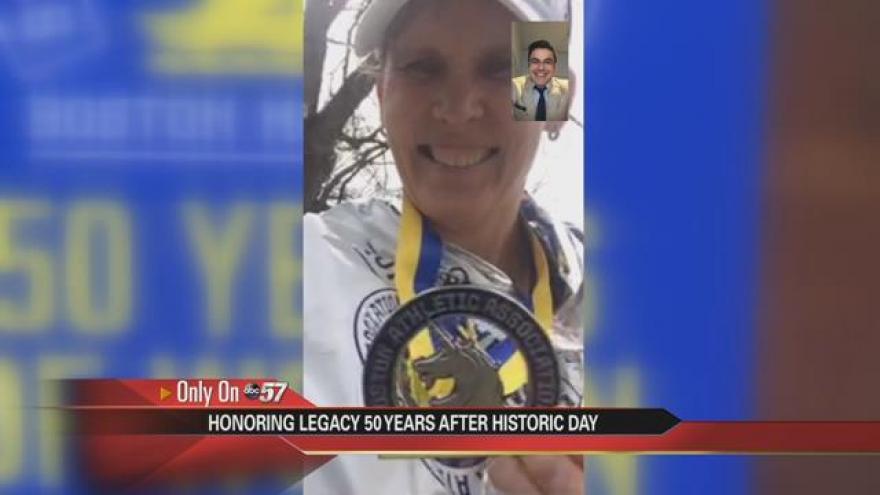 It’s been 50 years since the first woman completed the 26.2 mile journey from Hopkinton to Boylton St.

While it’s usually about that 26.2 mile journey, for that South Bend woman, it’s all about the number 261 and honoring a tradition that started exactly 50 years ago.

Nearly 895 miles away, one of their teammates, Notre Dame Dean and Professor, Laura Carlson, completed her sixth consecutive Boston Marathon.

“It was amazing to look around and see so many women running and realize that 50 years ago there was only one,” said Carlson.

The sole woman on the course that day, Katherine Switzer, was the first woman to break the gender barrier at the Boston Marathon.

Course officials tried to pull her off the path, but she was not to be denied.

“It was really special. I wrote 2-6-1 on my arm and the crowds cheered me on that day,” said Carlson.

Carlson ran 26.2 miles in honor of 261, the bib number Switzer wore on that historic day.

“You know you kind of forget because you are used to running so much, that it’s not something everyone can do. And so I think about that along the run. People who couldn’t be out there and running for them,” said Carlson.

Monday, bib number 17144 crossed the finish line thinking of the woman who came before her, and the ones that run alongside her.

Carlson finished with a time of 3 hours and 55 minutes, which is good enough to qualify her for next year’s race.

Next year marks the fifth anniversary of the Boston Marathon bombing.

All four ladies said it would be an honor to run it together.