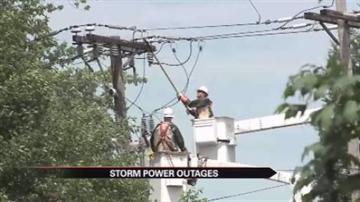 According to Indiana-Michigan Power, more than 10,000 homes in St. Joseph Indiana are without power.

In LaPorte County, 1500 are without power.

Elkhart County has 1100 homes without power.

There are scattered power outages in Berrien and Cass counties in Michigan.

Indiana--Michigan Power hopes to have power fully restored by Friday, but there could be a bit of a setback if we continue to get hit by storms.

"We have over 550 full-time employees on the ground working on restoring power and that is in the South Bend and Elkhart areas,” said Erica Putt of Indiana-Michigan Power.

Putt says electrical crews from across the region have been brought into help.

"We have crews in the Fort Wayne area Muncie, South Bend and Michigan,” said Putt.

Bill Catalano is one of the crew leaders.

On Wednesday his team restored power to thousands of residents in the area of Castle Pointe Apartments.

"A lot of the circuits have been assessed already and now it's just a matter of getting people out there and doing our job,’ said Catalano.

Alice Backs says the power company already identified the problem that left her in the dark in the Keller Park Neighborhood.

"Not too enthusiastic about it because they said it might be up Friday before we’re up,” said Backs. "Twenty-four hours, we can live with that, but not longer.”

That's why she went out and bought a generator.

Those who live on the north side of the street have been without power three days now while residents across the street never lost power.

One resident, who didn’t want to be identified, says she lost all the food in her fridge before she came up with an alternate plan. She strung several extension cords together to get power from a neighbor’s home.

"That happens a lot we'll have one side of the street these people have lights, these people don’t. And they don't understand is just the way our system operates,” said Catalano.

They don’t recommend the extension cord method, but Putt wants you to know they’re doing their best to restore power everywhere.

"Hospitals, high-priority areas, nursing homes, grocery stores, things like that on first. And then next after that we would focus on the largest pocket of customers,” said Putt.

Indiana-Michigan Power says crews will be working around the clock until power is restored.

But that may not be until Friday.