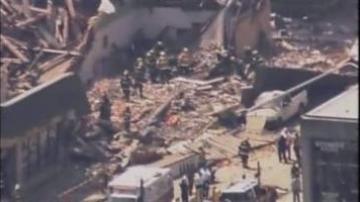 PHILADELPHIA — The search for survivors continues in the rubble of a Philadelphia building collapse.

The thrift store collapsed after part of a four-story building under demolition came tumbling down on top of it.

Overnight, rescue crews pulled the fourteenth survivor from the collapse.

The 61-year-old woman found alive was buried beneath a mountain of bricks for more than 12 hours. She was rushed to a Philadelphia hospital where she is listed in critical condition.

Officials say that at least six people were killed and and about twice as many injured.