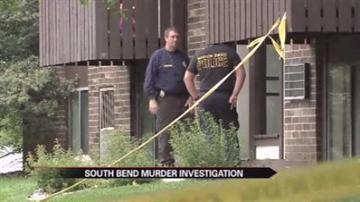 SOUTH BEND, IND. — A 6-year-old South Bend girl is dead and her mother is suffering from multiple stab wounds. Police say the little girl's father stabbed them both.

Police say they shot and killed Edward Mwaura when they walked in on him stabbing his daughter – and he wouldn’t stop.

The stabbing happened at the Irish Hills Apartment Complex in South Bend.

One neighbor who lives across the hall from the family said a verbal argument between the 6-year-old's mother, Lucy Mundia, and Mwaura turned physical and Lucy, who was suffering from multiple stab wounds, ran from her apartment and started screaming for help.

Lt. Wells said "This morning at approximately 5:06 a.m. South Bend Police received a 911 call regarding a domestic fight that was happening. The officers arrived to find a female victim bloodied in the parking lot, she confirmed that her 6-year-old daughter was inside the apartment with her husband."

Police officers said when they entered the apartment building they saw large amounts of blood smeared on the walls and floor and heard the little girl screaming from apartment 1B.

"Officers were feeling for safety of that child, they forced entry kicking in the door to the apartment." said Lt. Wells.

Once the door swung open, officers saw the suspect lying on top of his little girl stabbing her multiple times over and over.

Lt. Wells said, "To stop the attack, one officer fired his department issued weapon hitting the suspect, the suspect died at the scene."

Shirley was rushed to a local hospital where she was pronounced dead from her stab wounds.

South Bend Police Chief Ron Teachman said at a press conference held at MHU, "This is a very dynamic case in this ongoing investigation."

He deferred all comments on the situation to the MHU.

Crime scene investigators placed more than 21 crime scene flag markers marking evidence inside the apartment, in the hallway of the apartment unit, and in both the front and back yards.

Wells confirmed Mwaura was from Kenya, along with his wife and little girl.

A check with the St. Joseph County Sheriff's Department shows Mwaura was arrested on May 30th by South Bend Police for invasion of privacy at the Irish Hills address.

Mwaura was released that same day by the prosecutor's office and was to appear in court on May 31st according to booking information.