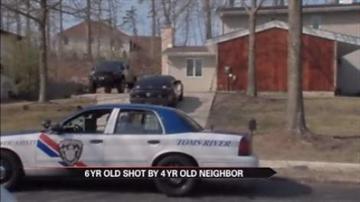 TOMS RIVER, N.J. -- A six-year-old is in critical condition in New Jersey after his four-year-old neighbor shot him in the head with a rifle.

It happened Monday in New Jersey in the backyard of the four-year-old's home.

Reports say he went inside and found the rifle.

The wounded child was about 15 yards away when he got shot.

"It's just something that shouldn't have happened. It's horrible," said Debi Coto, neighbor. "If a person is going to have a gun, for goodness sake, put it away."

The six-year-old is currently in the intensive car.

The shooter's parents are the ones who called police.