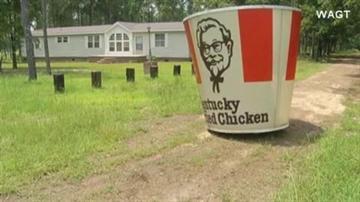 When a Georgia woman found a 7-foot tall Kentucky Fried Chicken bucket in her front yard, she didn't know what to think.

"I was driving by, I saw this giant Kentucky Fried Chicken bucket in my yard, and I thought for sure I was hallucinating, so I called my teenagers who were at home and had them go outside," said Aleena Headrick.

Unfortunately there was no chicken in the bucket.

Headrick says it appeared Thursday afternoon and she had no idea where it came from or who it belongs to.

"Too often we just need something to laugh about and so I put it on Facebook and told them that I would bring chicken to the next potluck," said Headrick.

The bucket has already become a popular landmark. Headrick says people have been stopping to take pictures with it.

The owner of the bucket is Freddie Taylor, Headrick's landlord.

He collects signs like this and says the bucket is quite a find.

"That bucket right there, if you notice it, it doesn't say KFC. It says Kentucky Fried Chicken. That bucket's probably forty years old," said Taylor.

Taylor plans to have it mounted on a pole so it will be permanently displayed for all to see.
But Headrick isn't mad. She says it will make her house hard to miss.

"It's unusual but it makes really landmarks when people come to our house. We can just say, 'Come down to the giant KFC bucket and turn right,'" said Headrick.

For those who come to the house looking for "Finger lickin' good" chicken, they'll have to drive another five-and-a-half-miles.