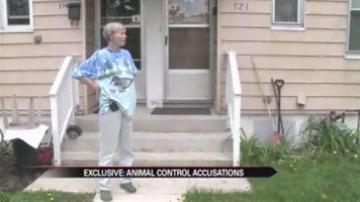 Karen Kirkpatrick said she called Animal Control to remove a sick raccoon from her neighborhood. In the process she said she was met with a very confrontational animal control officer.

“If something isn’t done I will file formal charges,” Kirkpatrick said.

The situation started with a phone call to animal control.

She and other neighbors noticed a visibly sick raccoon—foaming at the mouth, hanging around their homes and their children.

“The concern was that a child would walk up to the animal, which was possible, and the child get within two feet or so and it would attack,” Kirkpatrick said.

When the animal control officer got to her home Kirkpatrick said he was more focused on controlling her than finding that sick raccoon.

“I felt like he was inappropriate and not acting quite right.”

Kirkpatrick said she was standing on her front steps when he asked her where the raccoon was.

She told him it had gone up a tree and pointed him the in the direction he should go.

“At which point he assumed the position like this, with something, towards me, said don’t take another step forward,” she said.

ABC 57 confirmed with the mayor’s office that animal control officers carry a baton when on duty.

“I wasn’t quite sure that I was really seeing what I was.”

That’s when Kirkpatrick walked inside to call police.

She said the animal control officer told her he felt threatened and that’s why he changed his stance.

Kirkpatrick doesn’t buy it and is still in shock over what happened. She is even more upset the raccoon could still be out there posing a danger to those in her neighborhood.

ABC57 asked the city if any action is being taken against this officer.

In a written statement they said “the city does not discuss details of personnel matters.”

Kirkpatrick will meet with city officials Tuesday to discuss the situation further. As of right now she has not filed any charges.