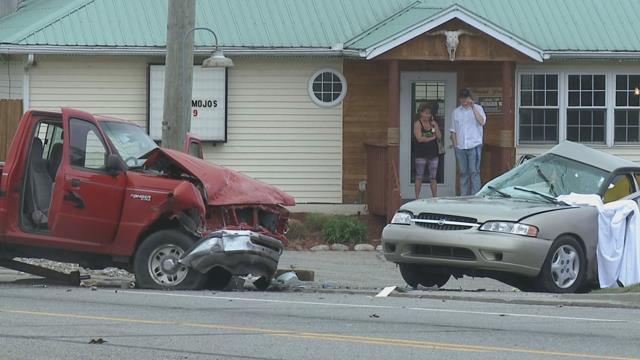 Officials release details on a deadly accident that happened in Elkhart County on Friday morning. Three people and one animal were involved.

Brookie Wilmore, 75-years-old of Elkhart, and a dog riding in her car passed away at the scene of the accident.

The two others involved were taken to the hospital and did not suffer life threatening injuries.

White sheets and a vest that says ‘coroner’ is never a good sign at the scene of a crash.

“What I do know is one person has died as a result of the crash and that would have been the vehicle that was heading south bound,” says Captain Jim Bradberry, Public Information Officer with the Elkhart County Sheriff’s Department.

The two vehicle accident at State Road 19 at Simonton Lake happened just after 8 a.m. on Friday.

Investigators spent about four hours on the scene and determined the tan car was traveling south on S.R. 19, then swerved left into the path of the red truck traveling north.

“The accident was already done by the time we got here but it wasn’t good, it wasn’t good at all,” says Jim Reed a co-owner of Michiana Autosport.

The smashed up cars and scattered debris make Reed cringe.

He owns a business just across the street and says reckless driving is not rare on the stretch of road.

“Well people drive way to fast and no one pays attention to the signs or the speed limit,” says Reed.

The speed limit on the road is 40 miles an hour but cars wiz by as soon as the accident cleared up.

“To say this area causes crashes would not be a valid statement at this point,” says Captain Bradberry.

Captain Bradberry says speed is not the only possible cause of this deadly accident.

The investigation is also looking into the possibility of distracted driving, alcohol consumption, or drug use.

INDOT who manages this stretch of road says its traffic engineers also conducted a similar investigation and results could take up to eight weeks.

With no official reason determined, Reed is still pleading with drivers to simply slow down.

In 2011 the road was converted from four lanes to the three lanes.

To alert drivers to the curves in the roadway solar-powered flashers and two sets of buzz strips were installed.

A review was completed a year after the changes and crashes were shown to decrease from double digits each year to a handful annually.

Even though the numbers may be decreasing, Brookie Wilmore is one more life loss to add to the list.

In regards to Friday’s fatal accident Hacha-Thomas SAYS INDOT will look at all aspects to determine what, if anything, INDOT can do to improve safety.