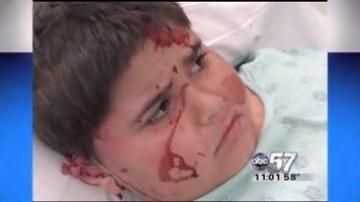 GOSHEN, Ind. – A little boy from Goshen was attacked by his neighbor’s dogs!  The scary moments all unfolded Friday afternoon.  Part of the 8-year-old’s ear was torn off.

Take a look at little Aiden Detwiler.  The cuts and bandages are evidence of just how bad this attack was, after he was mauled by two huskies.

“They ripped off the top of his right ear.  There was a very large gash in his right forearm.  They had to suture it and there was tissue protruding out of it," said Aiden’s mother Ariel Detwiler.

Aiden says he was playing with his friends across the street after school and he wanted to jump on the trampoline, but the dogs were outside.  But he decided to go anyway.  That is when the attack happened.

The woman who lives here and owns the dogs, Jaycee Flannigan, says she and her husband were not home at the time.  She says their roommate told the kids they could play on the trampoline, but he did not know the dogs were in the yard.

“I feel horrible.  I can not begin to imagine as a mother what she must be going through”," said Jaycee Flannigan.

But through it all, Aiden’s mom has been very understanding.

“I am not going to advocate for them to be put down.  I am an animal lover.  Aiden walked into their territory and sometimes that happens," said Detwiler.

Detwiler and Flannigan both agree there is a lesson to be learned from this terrible accident.

“They are huskies, they are playful.  We never thought they would do anything like this," said Flannigan.

They say people usually associate dog attacks with Pitbulls, and they want parents to beware any breed of dog can be dangerous if you invade it’s space catching it off guard.

The Health Department did make the family quarantine both dogs for 10 days.