8-Year-old raises money to buy his dog a wheelchair 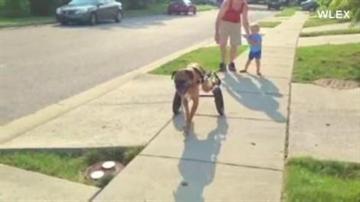 LEXINGTON, KY -- An 8-year-old in Lexington raised money for his dog to get a wheel chair. It's not ideal but the boy was determined to help his pet he thought of as a brother.

It's something that is hard to watch, especially if it's your own dog.

"He fell down the whole set of stairs and the next day his feet were sort of dragging and we realized [what] had happened to him," said Ryder, Cacious' owner.

"We knew the next step was to get him some wheels ," said Lyssa McConathy, Ryder's mother.
It was 8-year-old Ryder, who considers the dog another brother, who decided to raise money to buy the several hundred dollar wheelchair needed by selling key chains and magnets.

Ryder raised $315 in a matter of days, more than enough to buy Cacious' first set of wheels.

While still getting used to the apparatus, he's just a few steps behind.

"Hopefully this will give him a lot more freedom and mobility and he'll be with us a lot longer," said Lyssa.

Lyssa says the old pup isn't in any pain and just as playful as ever.

As she looks back at the video she took the first time he was on all fours again, she says it's hard not to get emotional.

Moments that wouldn't have been possible without an 8-year-old determined to make a difference.
"It's just his nature. He's always trying to think of ways to help," said Lyssa.

And now the boxer that used to run faster than anyone is rolling alongside them.

The McConathy family will donate the left over money they raise to the Humane Society.