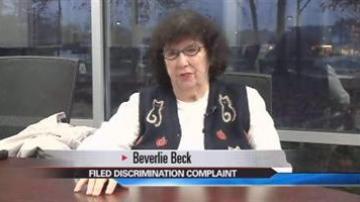 SOUTH BEND, Ind. -- Two months after South Bend school board President Roger Parent suggested two teachers be "gently escorted from the classroom" because of their age, one of those teachers is firing back.

In addition to filing the complaint, Beck also handed a letter to the school board asking that Parent be censured for breaking the law and blatantly discriminating against her because of her age.

Beverlie Beck has been teaching for over 57 years, "I teach because I really do enjoy it. I love to see the kids learn."

At 80 years old, Beck is still a force to be reckoned with in her classroom full of second graders at Hamilton Traditional School in South Bend.

Now, Beck's performance is under scrutiny after Parent sent an e-mail to the superintendent calling for the removal of teachers who are over the age of 80. Parent said he favors replacing older teachers with younger teachers, who were let go during budget cuts.

"That is assuming that everyone of a certain age is the same and you don't go by the age, you go by how they perform. Plus, it's against the law," said Beck.

That is why Beck decided to file a charge of age discrimination with the EEOC, but she isn't stopping there.

"He seems so quick to censure somebody else and I think that if there is ever someone that needs to be censured it is he because he jeopardized the whole school board," said Beck.

In one email, Parent said Beck is "no longer able to teach adequately", as well as citing poor evaluations as part of his reasoning behind the e-mails.

But Beck said that could not be further from the truth, "He lied. I am sorry to say that, but he lied. Also, when he tries to say he didn't name the teachers, he may as well have named us. There is no one else that fits into that category."

ABC 57 News obtained Beck's most recent teacher evaluations. Not only was she recommend for reemployment, she was praised for her effectiveness in the classroom and high energy level. Beck said she has never had a poor evaluation or a warning during her teaching career.

"I think I would like an apology more than anything. We could probably sue him for slander, but that is not what we want, we just want our names cleared."

So for now, Beck has no plans of back down or to stop teaching. "If I can't do my job, I will get out."