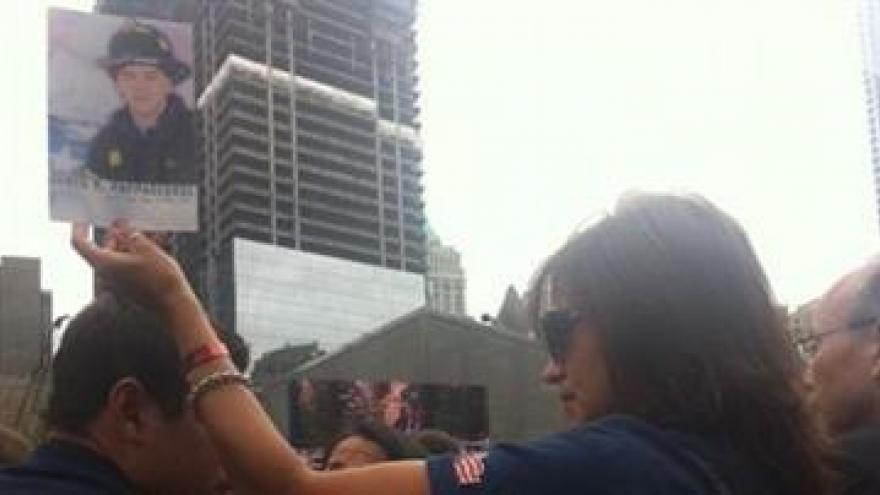 Gina Pinos said she felt her fallen firefighter fiancé all around today as she clutched his picture at ground zero.

Pinos’ 16-year-old son, Justin, wore Pappageorge’s FDNY shirt today. Pappageorge was not his biological father but had treated him like a son.

The mom and son were one of hundreds of families at ground zero to celebrate the nearly 3000 people lost on Sept. 11, 2001. They came with posters full of photographs of their loved ones and signs that simply read, “I Heart Daddy” and “Never Forget.” They wore t-shirts emblazoned with their images and sniffled as names were read.

Pinos can still remember the last time she talked to her 29-year-old fiancé.

“We left each other in the morning. … I took the train in [to work] from Yonkers. … I saw TVs showcasing the towers getting hit,” she said.

Pappageorge was six weeks into his career as a firefighter. Worried, Pinos reached him by pay phone at his firehouse as he and the rest of Engine 23 were being called to duty.

Pinos never got to tell him goodbye or her biggest secret of all: She was pregnant. She’d taken a pregnancy test the night before and had planned to surprise him with the news.

“I never got to tell him,” Pinos said. “I lost him and the baby because it was too much.”

The two had planned to marry Sept. 11, 2002. Today, Pinos brought pictures of her love to leave at the place on the memorial where his name has been carved.