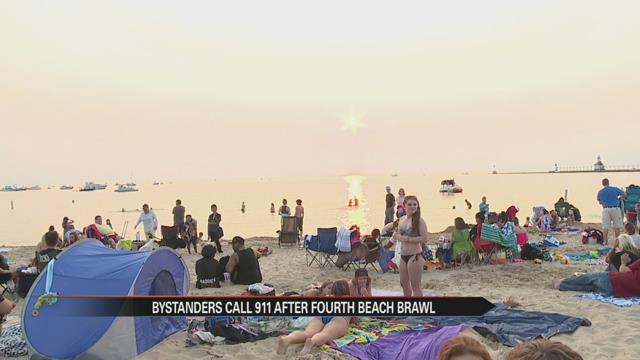 Through a public records request, ABC 57 obtained seven 911 calls from the night of July 4th when a large group of young people began fighting, shooting off fireworks and throwing bottles at Silver Beach.

“We have a riot down here at Silver Beach, there’s people throwing beer bottles all over the place,” one caller said.

A beach employee also called emergency services after locating a young woman who sustained a head injury from a bottle that was thrown.

“I don’t know if it’s an emergency but she got hit with a glass bottle and it’s a pretty big gash right above her eye,” the caller said.

These frightening calls plus video evidence posted to YouTube show a shockingly dangerous Fourth of July on the beach.

“I’m at Silver Beach and there’s a group of younger probably 20-year-olds that are literally throwing full bottles, coolers, thermoses across the beach and hitting people. I’m here with my kids,” one caller said.

More than a week later, Silver Beach regulars say they are already noticing some changes.

Herman Saitz vacations at the beach every summer, and has seen increased police patrol on the sand since Independence Day.

“Usually you only see one police car down on the beach but now you’ll see two, sometimes even three,” Saitz said.

Jake Sremba, who works for a beach business that rents out boating gear, has also seen more law enforcement.

“There’s a lot more like walking around Silver Beach and driving gators and four wheelers around,” Sremba said.

After celebrations on the Fourth went too far, the regulars say they couldn’t be happier to see more patrols.

“I feel like if anything does happen the cops will be right there,” Sremba said.