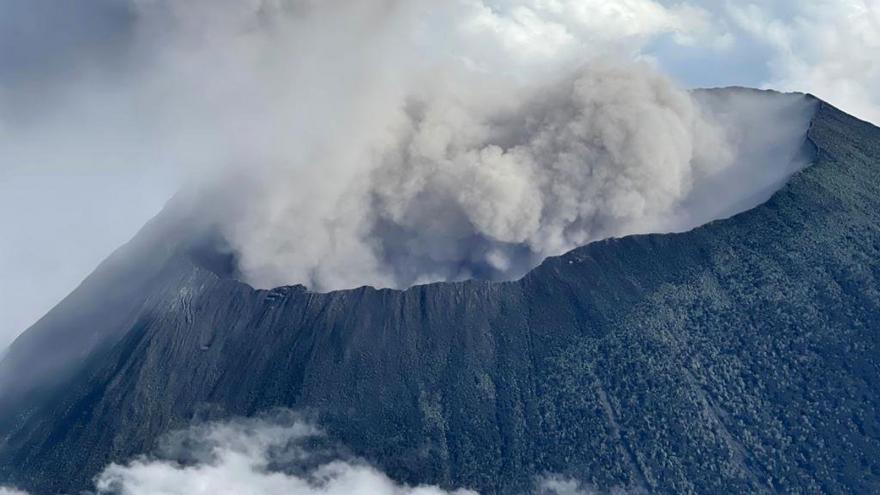 Dario Tedesco, a volcanologist who has been surveying the volcano,- Fabien Muhire/CNN said a rift in the regional faults continues to contribute to earthquake activity. Photo: Fabien Muhire/CNN
Originally Published: 30 MAY 21 08:07 ET
By Larry Madowo and Bethlehem Feleke, CNN

(CNN) -- A further 92 earthquakes and tremors have been recorded in the past 24 hours around the Mount Nyiragongo volcano in the Democratic Republic of Congo, a local government official told CNN on Sunday.

The 11,500-foot-high volcano first erupted last Saturday, killing at least 31 people. Since then, the area has experienced a series of earthquakes and tremors, some felt as far away as the Rwandan capital of Kigali, 65 miles from the volcano in the Virunga National Park.

"There were 92 earthquakes and tremors in the last 24 hours. Only 4 were felt by humans, the rest were only picked up by instruments," the military governor of North Kivu, Constant Ndima, said.

It comes as CNN has captured astounding new aerial images of Mount Nyiragongo volcano's crater during a helicopter ride on Sunday morning.

Dario Tedesco, a volcanologist who has been surveying the volcano, told CNN a rift in the regional faults continues to contribute to earthquake activity.

Tedesco said the plumes of light gray ash coming out of the volcano's crater, seen in the CNN footage, indicate that the crater floor is collapsing. "The top that was frozen is now going down. ... It's gently, not violently, going in. It's nothing to worry about."

He said it's black ashes that indicates an explosion, therefore the gray ash doesn't represent any imminent danger.

Tedesco, who has been studying the volcano since 1995, told CNN the volcano is past the peak of seismic activity but he cannot rule out the possibility of another eruption. He said the team needs a few more days to determine whether it's safe for people to return home.

Around 400,000 people have been evacuated from "Red Zones" in the city of Goma and its surrounding areas. Goma, the capital of the North Kivu province, is situated at the edge of Lake Kivu on the DRC's border with Rwanda. According to official projections from the United Nations, World Bank and others, the city is home to approximately 670,000 people. However a number of nongovernmental organizations in the region say the population is closer to 1 million.

"Let's be patient, this is the most important thing, we don't need to rush," Tedesco warned about people returning to their homes.