ELKHART, Ind. -- Elkhart's RV industry is booming right now. Production is high and sales are good, but is it coming at the cost of worker safety? ABC57 spent months investigating one local RV company after it was hit with thousands of dollars in safety violations.

The ABC57 Investigates team spent almost a year going over stacks of IOSHA inspection reports and talking to several current and former employees at Elkhart-based Forest River. What we found paints a picture of a fast-paced work culture filled with alleged drug use and lax safety practices. All proving to be a dangerous combination.

In the last few years the Elkhart RV industry has come soaring back to life after sinking deep into the depths of the 2008 recession.

President Obama took notice of the recovery with a second visit to the area near the end of his presidency and ABC57 even did an entire special highlighting Elkhart County's recovery last year as part of our Michiana 2027 series.

Demand is so high many RV manufacturers are offering highly competitive packages to potential employees to help increase production.

But in that rush to meet demand worker safety seems to be falling through the cracks at Forest River -- a company that bills itself as one of America's leading manufacturers of recreational vehicles.

We spoke to several current and former employees who shared those concerns. Many declined to speak on camera out of fears of retaliation.

One former employee did agree to speak on camera -- if we hid his identity out of fears he would be frozen out of the industry for speaking up. We confirmed his employment through an old Forest River pay stub.

He described the work environment inside the plant as fast-paced.

The company has a 3.2 rating out of 5 on indeed.com, a website that allows current and former employees to review their employers.

Some call it a great place to work, while others say there are problems. One thing almost every worker agreed on was the fast pace. That pace inspired by the "piece rate" one former manager told us about. It means the more pieces completed the more you get paid.

"They try to enforce safety as much as possible, but of course there are slips within the system you would say," the former worker told us.

Those slips eventually drawing the attention of the Indiana Department of Labor.

The company showing up in a 2017 Annual State Occupational report as a "significant case" due to "excessive injuries".

According to the report, in the first 9 months of 2017 alone there were 9 fingers amputated, a fractured pelvis and multiple foot fractures.

Indiana's OSHA office then sent a team of six people to Forest River plants in Goshen and Middlebury and eventually several others.

To compare, during that same time period only four other local RV companies were hit with safety violations. The most was Lippert Components with 10 violations and initial fines totaling $45,000. 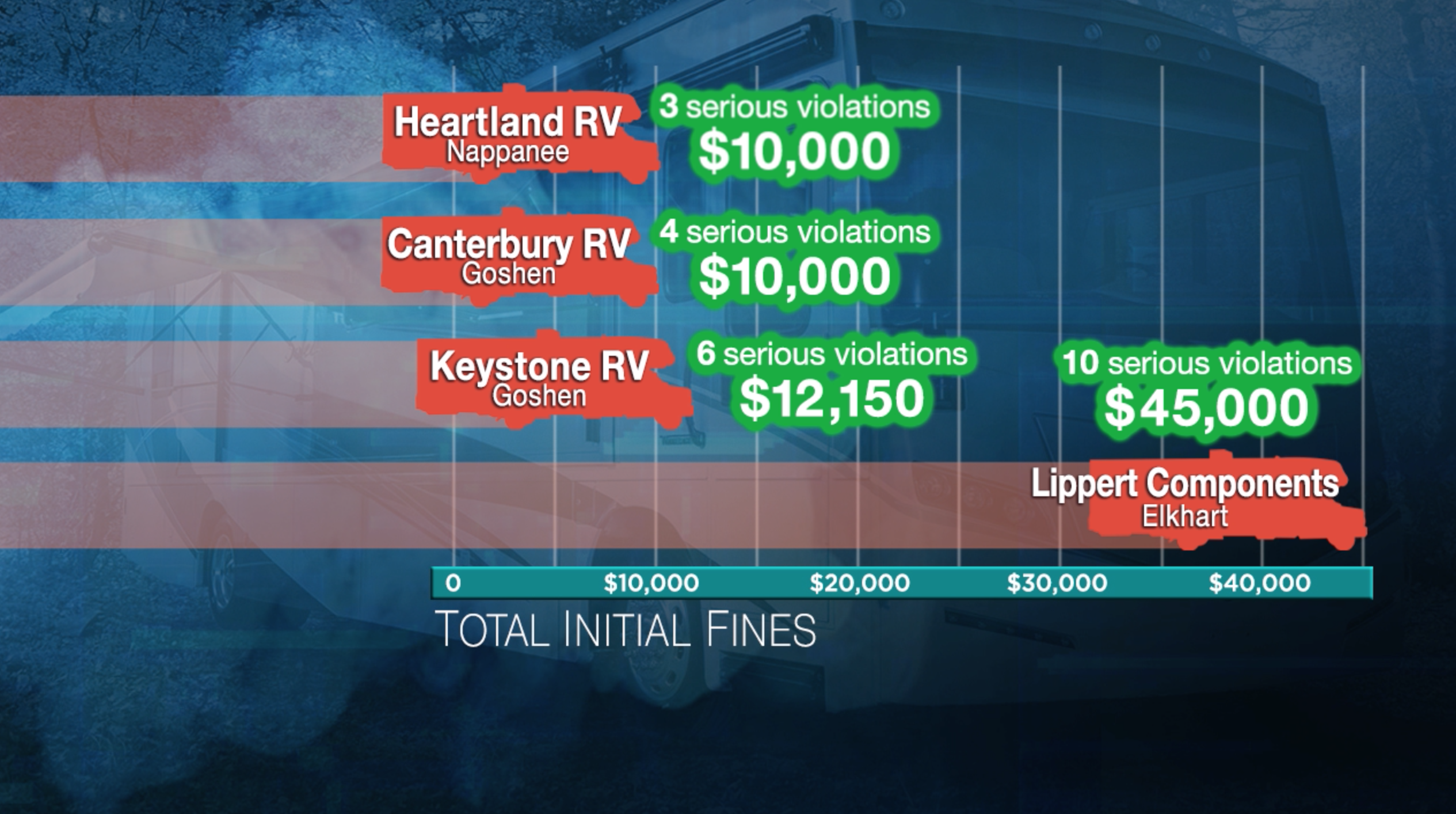 In some cases, inspectors found Forest River employees were not properly trained and wearing the proper protective gear was not mandatory.

"I've seen people cut their fingers, cut their hands and their arms," said the former worker. "There was a guy that fell off a scaffold before."

Some of the violations were corrected during inspection and penalties were reduced after the company reached a settlement agreement with IOSHA.

We requested a sit down interview with IOSHA, but instead were given audio clips explaining inspection protocols and how employers can correct violations.

"An IOSHA settlement agreement requires that the employer do more to address worker safety and health in its work place than just simply pay the penalty associated with the violation," said IOSHA Director, Michelle Ellison.

Part of one of those agreements was to take part in IOSHA's INSafe program.

"It really helps the employer take a comprehensive look at their workplace," said Ellison. "The mission or the goal of this program is to help them identify opportunities to essentially improve worker safety and health and help better ensure compliance with IOSHA regulations."

But the violations and injury reports did not stop. They continued to come in through most of 2018. Paramedics were called twice to the company's Starcraft division in Goshen, one of the locations hit with repeat violations.

ABC57 obtained all dispatch calls to the Goshen plant. One from January 2018 was for a 50-year-old man who fell 12 feet hitting his head. Then in May a man in his 50's had two deep lacerations to two of his fingers.

It's not just happening in Indiana. Forest River has received violations at plants in four other states.

According to OSHA documents ABC57 obtained, 33 of the violations were serious. The fines totaling $132,000. 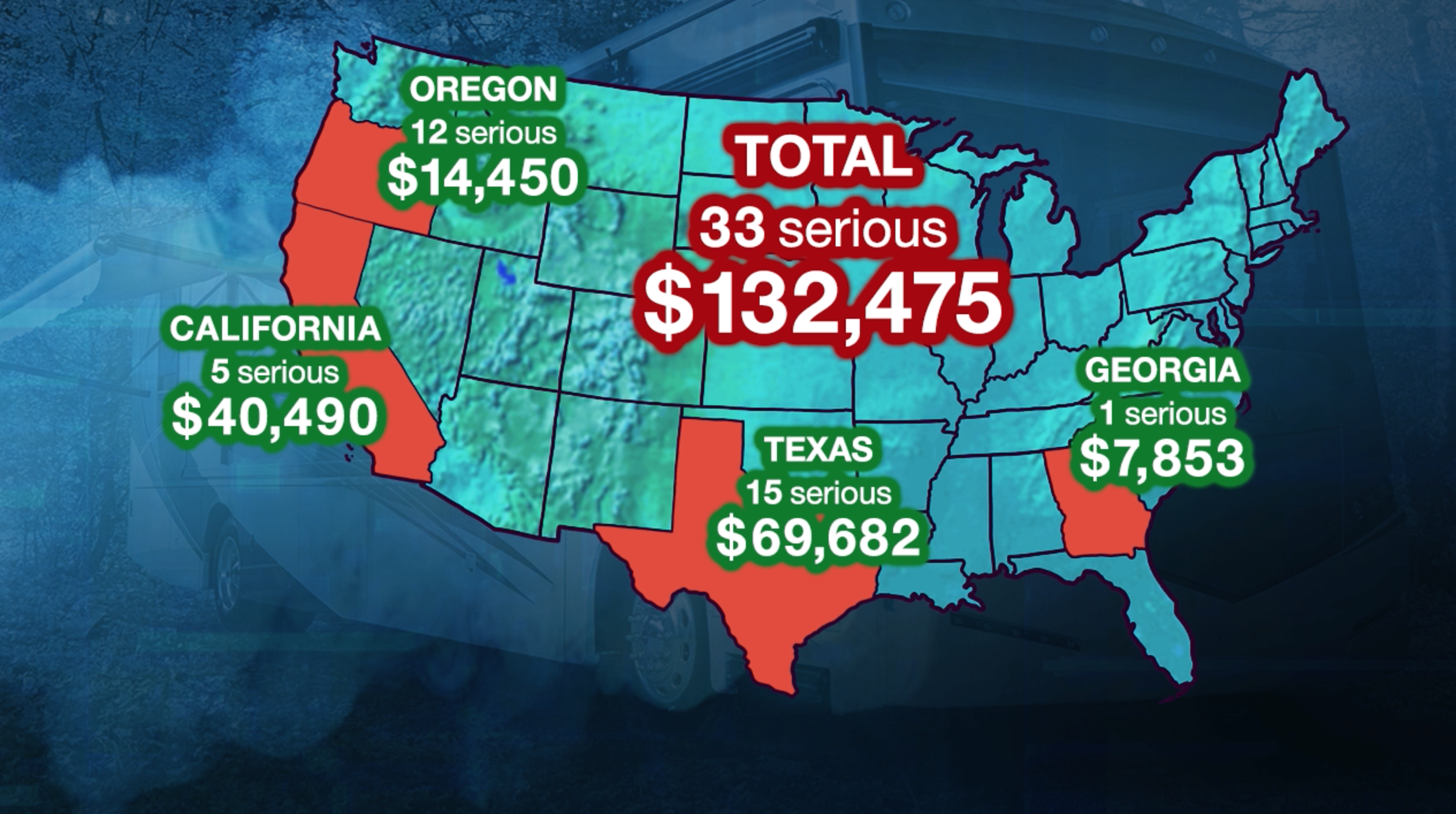 Workers we spoke with say, it's not just lax safety practices, but a widespread culture of drugs.

We asked our anonymous worker if there is drug use happening at the plant? He answered, yes.

Workers tell us, that is not enforced.

"I never personally experienced anyone getting talked to about drug use," the former worker told us.

Some of the job reviews on indeed echoed that statement.

One former employee from Goshen posting, "the plant I was in was full of drug use. "

Another former employee from Dallas saying, "many workers are regular drug users and frequently high during shifts."

When asked what kinds of drugs were being used in the plants our anonymous former worker said, "Pills, marijuana, cocaine and probably meth."

He recalled an experience watching one worker who appeared to be high on the job.

"One time one guy was screwing through the wrong end and he screwed a whole screw through his hand," the former worker said.

He added that he was not drug tested when hired. Other workers we spoke with said the same.

A former manager who spent more than 15 years working at Forest River told us, they eliminated regular drug testing and only test if someone is involved in an accident on the job.

That's something employees say has helped lead to drug use on the job.

We asked the former worker if the lack of drug testing has made it become a problem there? He said, "at times, yes."

For now business is still good at Forest River and until that changes employees don't expect life inside the plant to change.

"As long as there is money going out the door you know it doesn't matter," the former worker said.

They just hope it doesn't come at the cost of one of their lives.

We brought these allegations to Forest River's attention, leaving detailed voicemails and emails, but so far they have not responded to our requests for comment or for an on camera interview.