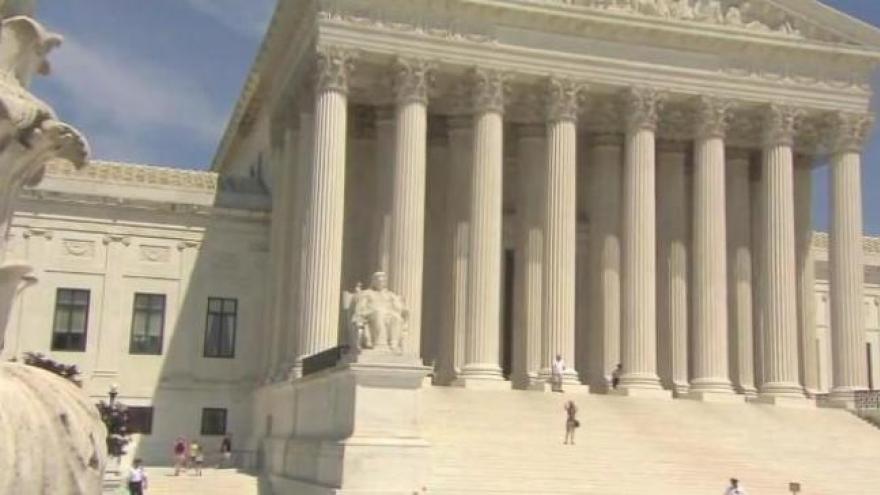 Local leaders are releasing statements about the Supreme Court's decision on same-sex marriage.

“Like many Hoosiers, I believe marriage is the union between one man and one woman, and I am disappointed that the Supreme Court failed to recognize the historic role of the states in setting marriage policy in this country. Nevertheless, our Administration will continue to uphold the rule of law and abide by the ruling of the Court in this case. Under our system of government, our citizens are free to disagree with decisions of the Supreme Court, but we are not free to disobey them. As we move forward as a state and a nation, Hoosiers may be assured that our Administration will respect the law and the dignity and worth of every Hoosier and every Hoosier family.”

Today's ruling means that millions of Americans will live freer and more equal lives. That includes thousands of people right here in South Bend, so it's a good day for our whole community. Today is a reminder that despite all our challenges, America's Constitution continues to guide us toward a more perfect union.

“Decisions of faith are the most personal and precious we make in this lifetime. Guided by my Christian faith, I believe that marriage is a solemn covenant made between a man and a woman before God. I also believe we should live our lives rooted in love and respect for our neighbors, regardless of their personal decisions or religious convictions. It is my long-held opinion that this deeply personal issue – which divides many families and friends – should be decided by the voters in each state. Now that the Supreme Court has imposed its own definition of marriage, we must ensure that religious freedom is protected across America. Established in our nation's founding days and sustained for over 200 years, religious liberty is at the very core of our system of government and our way of life. All people of all faiths must have the right to exercise their faith within the bounds of our justice system.”

“Same-sex marriage has been a divisive issue in Michigan and across our country. Recognizing that there are strong feelings on both sides, it is important for everyone to respect the judicial process and the decision today from the U.S. Supreme Court. Our state government will follow the law and our state agencies will make the necessary changes to ensure that we will fully comply. Let's also recognize while this issue has stirred passionate debate, we now should focus on the values we share. With this matter now settled, as Michiganders we should move forward positively, embracing our state's diversity and striving to treat everyone with the respect and dignity they deserve.”

"Today's historic decision by the U.S. Supreme Court is an affirmation of that core American principle that all individuals are created equal and should be treated as such regardless of what they look like, where they live or who they love. And, unlike Mike Pence, if elected I will work to defend that principle for all Hoosiers. As Governor I will seek the full repeal of the divisive RFRA law and will work to extend full civil rights protections to LGBT citizens so a person's sexuality can no longer be used as grounds for termination of a job or denial of any public services or accommodations.  I'll also sign an executive order to outlaw discrimination of LGBT Hoosiers within state government and in any entity that wishes to do business with the state or receive funds from my administration. Hoosiers and all Americans face great challenges in the years ahead, but we will only be able to meet them if we stand together. There can be no room in our state or nation for discrimination of any kind and today's court ruling is another step in that direction.”

“We are thrilled with today's decision at the U.S. Supreme Court.  It's a historic win for Michigan families, for freedom and for basic civil rights for all citizens. We're incredibly thankful to April DeBoer, Jayne Rowse, their legal team and all the civil rights pioneers who made this happen.  Thanks to their courage, love wins – and everyone in the United States now has the freedom to marry who they love. More than 280,000 GLBT citizens in Michigan are winners today – and so are thousands of children who are being raised by gay and lesbian couples.  In fact, everyone in Michigan wins today – because when love wins, we all win.  Our state is a stronger and better place to live when we stand together for dignity, diversity and equal rights for all citizens.”

“I welcome today's Supreme Court ruling that all Americans are now free to marry whom they love. We are a stronger state in Indiana and a stronger country when we support inclusion, respect, and equality for all Americans.”

“In Indiana, we believe a good government is one that solves today's problems and improves the overall well-being of hardworking families. Today's ruling by the U.S. Supreme Court to allow full marriage equality nationwide reaffirms this principle. The hard work and efforts of so many in Indiana is now not only vindicated, but also lets same-sex couples know they are on equal footing to their peers. While we still have more work to do to ensure every single Hoosier is protected under our civil rights statutes in Indiana, today's ruling shows that we're one step closer to equality under the law. That is a freedom we should all be proud of."

“We are thrilled that the Supreme Court has decided to bring marriage equality to all 50 states. This is a huge step in recognizing LGBT people as equal members of the community. This decision not only allows LGBT couples to freely show their love through the union of marriage, but also brings a quality of life that until now has been reserved only for a fraction of the population. While the march toward equality for all is not over, a huge step was taken today.”