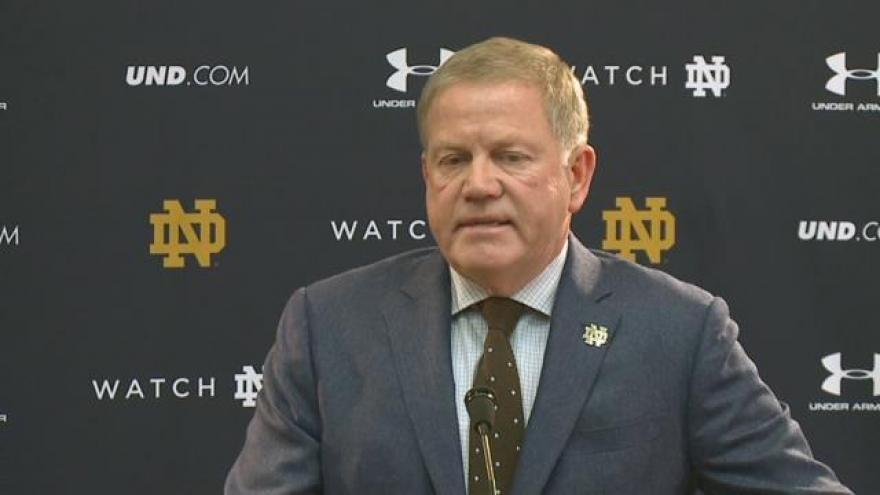 The NCAA Division I Committee on Infractions panel found a former student trainer at the University of Notre Dame committed academic misconduct. As a result, the NCAA has implemented penalties, including vacating wins from the 2012-2013 and 2013-2014 football seasons in which the ineligible students played.

According to the NCAA investigation:

The investigation by the NCAA began after the University of Notre Dame discovered some possible academic misconduct.

Although the players involved in the NCAA investigation are not named, in early August 2014, four players were sidelined during academic dishonesty investigations.

The NCAA imposed the following penalties

In September 2016, the university contested the vacation of all team and head coach records. The NCAA upheld its decision.

The University of Notre Dame's vice president for public affairs and communications, Paul J. Browne, said the university would appeal the ruling.

Head Coach Brian Kelly stated, "It's never happened before in the history of the NCAA. A penalty has never been issued in this fashion before."

The university itself was not involved in the misconduct, it was committed by a student trainer.

Coach Kelly said during a press conference the sanctions would affect all 21 wins during those two seasons.

This is the university's full statement:

The University of Notre Dame will appeal the decision announced Tuesday (Nov. 22) by the NCAA Committee on Infractions to vacate 2012 and 2013 football victories, the University’s president, Rev. John I. Jenkins, said. The NCAA has never before vacated the records of an institution that had no involvement in the underlying academic misconduct, and the membership has since voted to change the rule that brought this case within NCAA jurisdiction.

The penalty was based on misconduct by a former student who participated in the University’s student trainer program. She wrote papers for student-athletes, which was obviously unauthorized academic assistance. The University discovered the academic misconduct in 2014, and then addressed that misconduct through its honor code process. As a result, Notre Dame retroactively lowered grades of three student athletes who received improper assistance from the former student, giving them no academic credit that was not honestly earned.

“We very much appreciate the hard work of the NCAA enforcement staff and the members of the Committee on Infractions for their review of our case, but we believe the penalty they have imposed is not justified,” Father Jenkins said.

“We are disappointed in the actions of students who engaged in dishonesty, but we are gratified that the NCAA investigation confirmed the conclusions of our own internal investigation: Notre Dame acted honorably throughout. As soon as professional staff suspected academic dishonesty on the part of a student, the matter was reported promptly, investigated aggressively and thoroughly and adjudicated in accord with our Academic Code of Honor procedures and norms. In this case, everyone involved — those in Academic Services for Student-Athletes, in our football program and in our Compliance Office — and the faculty and students resolving these cases under our Honor Code did everything that we could have asked of them.

“We disagree with the decision of the hearing panel to impose, at its own discretion, a vacation of records penalty. In past academic misconduct cases, the Committee on Infractions has imposed this penalty only when it has found serious institutional misconduct, such as actions with the direct involvement or knowledge of a coach or academic personnel, a failure to monitor or a lack of institutional control. The NCAA enforcement staff and the hearing panel agreed with Notre Dame that no such institutional misconduct occurred in this case. Indeed, the only reason the NCAA reviewed the matter was because the misconduct involved a former fellow student who happened to participate in the University’s student trainer program—an activity which involved no responsibility for the academic work of student-athletes.

“We believe that imposition of the vacation of records penalty without serious underlying institutional misconduct will not primarily punish those responsible for the misconduct, but rather will punish coaches, student-athletes and indeed the entire institution who did nothing wrong and, with regard to this case, did everything right. We are also concerned that establishing this precedent will infringe on universities’ autonomy in deterring academic dishonesty, for it will discourage the retroactive lowering of grades even when an honor code committee deems this appropriate.

“As we said at the outset of this investigation, Notre Dame would willingly accept a vacation of records penalty if it were appropriate. It is not in this case. Indeed, should this precedent stand, it could create a perverse incentive that will discourage institutions from investigating so aggressively and imposing the penalties for academic dishonesty that their honesty committees might judge appropriate.”

University academic staff members became concerned about potential academic misconduct by one student-athlete and the former student in the summer of 2014. As a result, the University promptly launched a comprehensive investigation that included the review of 95,000 documents. The University immediately suspended the involved student-athletes from all athletic activities. At the conclusion of its honor code process, the University dismissed four student-athletes and imposed retroactive grade changes in the affected courses.

Notre Dame will submit its case to the NCAA Infractions Appeals Committee.