The data-driven plan’s name reflects its goal: to make South Bend carbon neutral by the year 2050. It was prepared by the Delta Institute for the city and utilized multiple focus groups of community organizations and leaders.

Mirroring goals set by the Paris Agreement, the plan offers a framework for understanding the driving forces behind local climate change impacts.

Transportation and energy use represent the largest sources of Greenhouse Gas (GHG) Emissions in South Bend, the plan said. 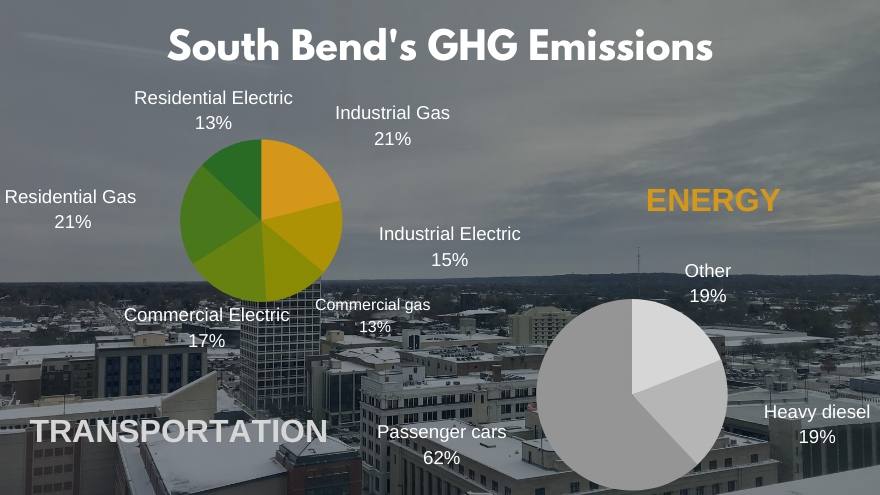 Data from the City of South Bend's Climate Action Plan

For energy use in buildings, strategies listed in the plan to reduce GHG emissions include increasing energy efficiency across residential, industrial and commercial sectors and transitioning to renewable energy sources.

South Bend’s Director for the Division of Sustainability, Therese Dorau, a key voice in the plan, says the work is necessary.

“We’re starting to really see climate change occurring real time in South Bend. Some of the big ways that you see it in South Bend, and throughout the Midwest, is increased rainfall, which can often lead to increased flood events, like we’ve seen throughout the last few years,” Dorau said.

In February 2018, homes and businesses in the city, and across northern Indiana, were devastated by intense flooding that the plan called a “500-year flood.” It was preceded by a “1000-year flood” in 2016. 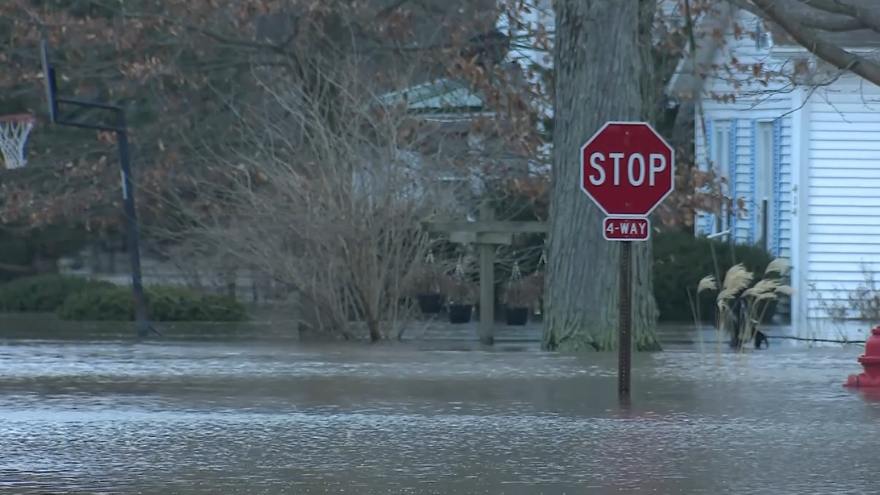 A 2018 photo of a stop sign in South Bend submerged in flood waters.

According to the plan, the city is estimated to have suffered $2.1 million in flood damage to municipal entities.

“Many of us in this region have been impacted by historic floods that only happen every 500 hundred,  1000 years. That’s no joke. We’ve got a lot of fresh water in this area, which is great, but when we have a deluge of hard storms, which we will be getting more of as weather gets more erratic in response to changes in the climate, that’s going to continue to impact us,” said Krista Bailey, the Director of the Center for a Sustainable Future at Indiana University South Bend.

Bailey also says climate change has impacted our health, an example being the extension of allergy seasons.

“People are like ‘oh gosh my allergies are so bad this year.’ Well they’ve been getting worse every year,” Bailey said, citing the increase in allergens and molds circulating through our air supply.

“It’s not just about making the air cleaner”

Bailey said her first reaction to seeing the release of the Climate Action Plan was “finally,” as she says many other municipalities have released similar plans as a first step towards mitigating the effects of climate change.

“I think we can reach the goal by 2050, but it’s going to take a lot of effort of everybody understanding why this is important and what you can do as an individual, not just what the government is going to do to address this,” Bailey said.

Dorau says the average resident won’t immediately feel impacts from the plan but hopes that it will eventually benefit all areas of the community.

“Implementing some of these climate action strategies should benefit every single person in the community, from the lowest income family that struggles with only one car to the biggest business who uses an extraordinary amount of energy to manufacture something,” Dorau said.

Bailey says one of the strongest parts of the plan is the list of co-benefits that the community will potentially feel if goals are met.

“It’s not just ‘let’s make the air cleaner,’ that affects our health and that creates a nicer community in which to live, work and play so you can run your business here with healthier people working for you and supporting your business,” Bailey said.

According to the plan, transportation is responsible for about a third of South Bend’s GHG emissions.

“You driving alone in your car, we have to reduce that. That is clearly the bulk of our impact as a community,” Bailey said.

South Bend's current bike-share program, Lime, recently announced that it will remove bikes and scooters from South Bend in the coming months. 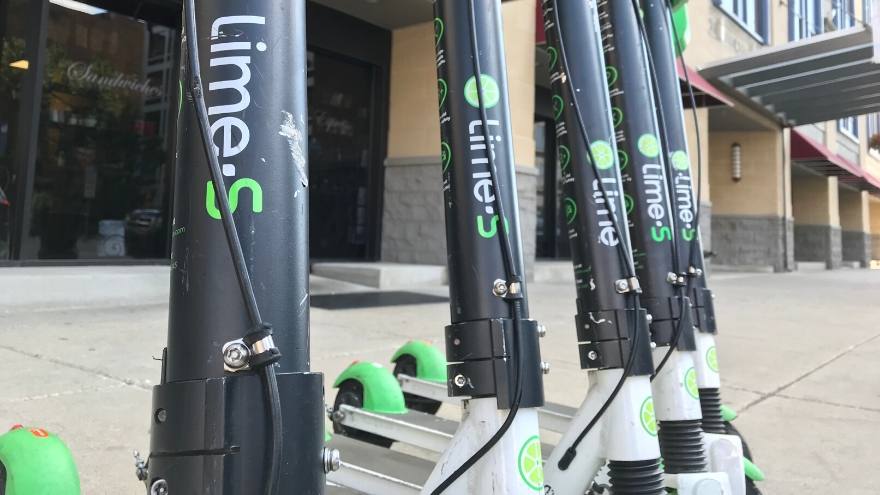 Lime scooters on a sidewalk in downtown South Bend.

An official with the City says that while the Lime contract is ending, the City is currently engaged in a vetting process with another shared mobility device company and will have an announcement regarding it by year’s end.

“When we first had that big drop of bikes, we looked like a bicycling community and people who could get around on bikes. They were everywhere, “Bailey said. “I’d like to see that again. Not necessarily with all bike shares everywhere, but just people on bikes because now I think we’ve got a taste that we can do this, that we can bike places or scooter places. It’s possible.”

Energy use in buildings accounts for about two-thirds of South Bend’s GHG emissions, according to the plan.

Dorau says work is already being done in the community to make buildings more energy efficient.

“Community members are also pitching in. Many restaurants have decided to reduce waste, ditching straws, switching their own fleets, putting up renewable energy, doing efficiency projects in their own buildings,” Dorau said.

The solar array on top of the Century Center, the city’s LED lighting, electric vehicle charging stations and Green Building Certified buildings are just a few examples of measures that already exist to decrease energy-use.

Both Dorau and Bailey are urging community members to read the full plan and find ways to reduce their own energy usage.

The South Bend Common Council is holding a special meeting on Monday, November 18 from 5:30 to 7:30 p.m. in the Council Chambers to discuss the Climate Action Plan and solicit public comment.