A Christmas miracle? Modest delays at airports ... so far 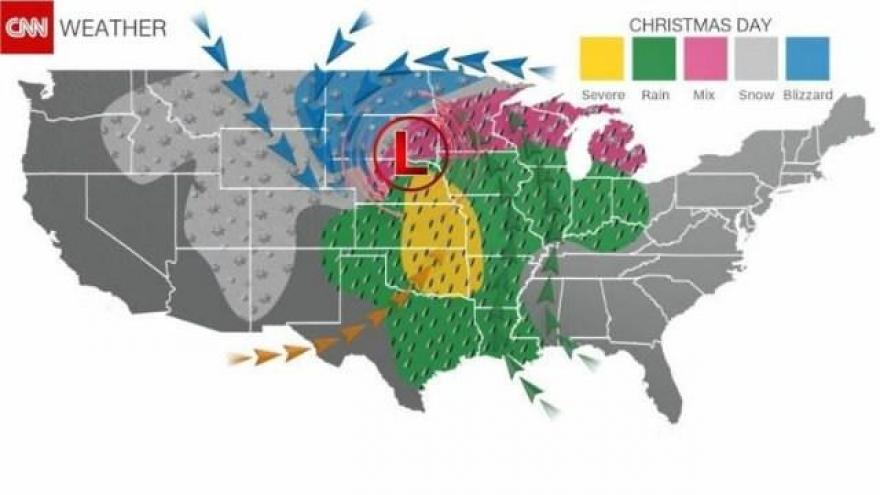 (CNN) -- A major winter storm is hitting the West, but for most, the weather outside isn't so frightful that it will ruin your holiday plans.

The number of flight delays started to creep up as the day wore on Friday. By evening, nearly 3,000 flights were affected across the United States, according to the FlightAware flight tracking website.

Experts say travelers should brace themselves and prepare for holiday travel hiccups.

A record high number of Americans -- more than 100 million -- are expected to travel between now and January 2, according to AAA.

And if you're in the West on Friday, there's a good chance snow and ice will be part of your journey.

A major winter storm is bringing heavy rain along the coast and widespread, heavy snow in the Rockies.

More than a dozen states are under some sort of winter watch, warning or advisory. And some parts of the country could see more than a foot of snow fall in the next 48 hours.

According to FlightAware, 562 flights have been canceled so far Friday, and more than 120 of them are within, into or out of the United States.

Beyond the normal holiday rush, delays are expected in Chicago and Minneapolis because of snow and low clouds.

In Los Angeles, expect major delays due to rain and low clouds, not to mention runway construction.

New Jersey's Newark Airport experienced delays after their AirTrain system stopped running, but it has since resumed service and is even being supplemented with bus service.

San Francisco, Seattle and Houston could see flight delays because of low clouds.

A plane carrying the Minnesota Vikings football team slid off a runway Friday evening at Appleton Airport in Wisconsin. The NFL team is playing the Green Bay Packers on Saturday.

The Vikings posted on Twitter that the plane was taxiing after a safe landing when it slid off the runway and became stuck.

The Appleton Airport released additional airport through their Twitter account. The airport says, "Minnesota Vikings team had a rear wheel leave the taxiway en route to arrival gate." No injuries were reported.

Dreaming of a white Christmas?

Holding out hope for a snowy holiday once you make it to your destination?

If history is any indication, some parts of the country have a good chance.

Some people may even see a whiteout Christmas this year.

A blizzard is forecast for North and South Dakota.