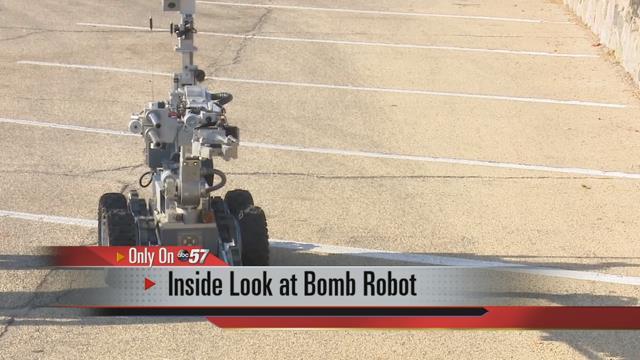 On Wednesday ABC57 got a close look at a robot owned by the Elkhart Police Bomb Unit. The robot is similar to the device used by police in Dallas during an officer ambush in July.

The robot in Elkhart stands four feet tall, with speeds up to 3.5 miles per hours.

The 485 pound robot is not known for its speed but its ability to pick up suspicious items and go places that might be unsafe makes it a solid member of the Elkhart City Bomb Unit.

Lieutenant Miller says Cecil has been with the department since 2005. Cecil is mostly used on calls of suspicious items and on average hits the streets 12 times a year.

“We can control it from a remote location inside of our bomb truck,” says Lieutenant Miller.

Cindy tells the robot what to do and where to go.

The robot can be controlled up to a mile away from the truck and there are three cameras attached to Cecil giving officers a closer look at suspicious items.

“We can examine the object before we decide to move it or whatever we are going to do with it at that time,” says Lieutenant Miller.

Cecil was last used in late September when a hand grenade was found outside a goodwill donation box in Syracuse.

The telescoping arm handled the grenade that police later found out was a dud but in that moment they had no what would happen with the potentially explosive item.

“It’s really nice to have that where it make you feel a little more comfortable about being able to do the job and doing it in a safe way so that we can all go home safe every day,” says Lieutenant Miller.

Bought on a federal grant and including upgrades the robot cost $185,000, money that Lieutenant Miller says was well spent.

“It’s pretty fun to play with but it’s mainly for officer safety so we don’t have to put an officer’s life in jeopardy or in danger by sending them into to do something that the robot is able and capable of doing,” says Lieutenant Miller.