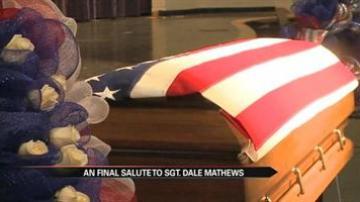 NEW CARLISLE, Ind. -- Technical Sergeant Dale Mathews was a month away from retiring when a training exercise in Norfolk, England went terribly wrong. Three other Americans also died in the crash.

"That was his dream and I would rather enjoy flying," says Keelan Mathews.

"To make sure you live life to the fullest and have no regrets," says Keelan.

During his career in the Air Force, Dale saved more than 300 lives.

"I am so proud of him, for everything he has done and now everything that the Air Force is doing for him to see that he is remembered in a way he should be for his 18 years of service," says Gussman.

Technical Sergeant Dale Mathews will be laid to rest at Arlington National Cemetary Wednesday, Febraury 5.  The family has set up a memorial fund at 1st Source Bank under the name Dale E. Mathews Memorial Fund.