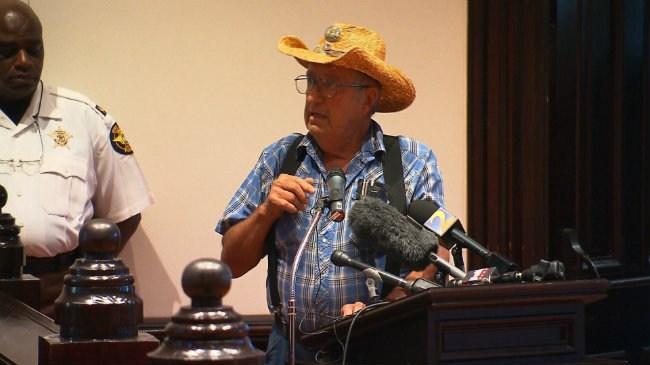 (CNN) -- Eleven years ago, when Mohammad Islam decided to open his mosque, he built his modest house of worship inside a ranch house on a quiet street in Doraville, Georgia.

Over a decade's time, Al Maad Al Islami grew slowly from a handful of members who prayed there five times a day to more than 200 people attending evening prayer on Fridays.

The 50-year-old soft-spoken imam, who in the early 90s left Bangladesh to come to America, has long believed the day would come when his mosque would outgrow its current home. In his mind, part of that growth meant the construction of a cemetery so that his congregation could bury the dead, and a mosque devoted to funeral rituals.

Islam looked far and wide for a place to build a mosque and cemetery before purchasing a 135-acre plot 40 miles southeast of Atlanta. The undeveloped land was cheap at $675,000, and across the street from a Baptist church with an adjacent cemetery.

Only a fraction of the land, Islam said, would be needed for the mosque -- the rest had the potential to be developed into a park, housing and a school for religious education. In August 2015, Al Maad Al Islami inked the deal, obtained approval from Newton County, and everything seemed to be settled.

"We thought we'd have no issues," Islam said.

Then the word got out: First, details leaked from a county planning meeting, then one local politician opined whether the federal government would resettle Middle Eastern refugees nearby as a result, and soon the "STOP the Mosque" Facebook page appeared with the #?NoJihadInDixie? hashtag. In response to the uproar, Newton County officials last week passed a moratorium on the construction of all houses of worship to further study issues such as the impact of traffic and noise.

"This wouldn't have happened if this was a Protestant church," said Edward Ahmed Mitchell, executive director of the Georgia chapter of the Council on American-Islamic Relations (CAIR), a national Muslim advocacy group. "This won't stand up in the court of public opinion, much less a public court."

In recent years, Islamophobia in America has largely emerged in the form of fiery campaign rhetoric -- GOP presidential candidate Donald Trump's proposed Muslim ban -- as well as violent confrontations. But it's also quietly occurred, as American Muslims from New Jersey to Illinois to Georgia have witnessed, through local elected officials' use of zoning rules to stop new Islamic facilities from coming to town.

Beyond the borders of Atlanta's suburban sprawl, Newton County's population has grown by more than two-thirds since the turn of the millennium. The area has also become increasingly diverse: White residents, who in 2000 accounted for three-quarters of the population, today barely make up the majority.

The change, now taking the form of Islam's cemetery mosque, compelled more than 300 people to attend a pair of town hall meetings Monday night in the city of Covington. Flanked by uniformed officers, Newton County residents took turns calling for compassion and voicing their opposition to the proposed mosque and cemetery.

Randy Toms, one resident who spoke at the meeting, said news of the proposed mosque and cemetery had "totally surprised" nearby community members. "We are here tonight to find out what's really going on."

His wife, Joy Toms, voiced her suspicions: "As a United States citizen we don't need people that don't want to go by our laws. What are they actually going to be doing there at the mosque?"

'These are really scary times'

Between 2009 and 2015, CAIR has documented more than 40 incidents in which mosque proposals faced interference due to what it says is Islamophobia. In a report released in December 2015, the group also found more incidents targeting mosques -- including vandalism, harassment, and intimidation -- since it started keeping tabs on such incidents at the end of the last decade.

In the past five years, officials in cities across metro Atlanta have used zoning laws to deter Muslim projects from being built. The city of Lilburn twice rejected a Shiite group's mosque proposal -- only approving it in 2011 after the Department of Justice got involved. Two years ago, Kennesaw rejected an application for a mosque seeking to operate out of a shopping center -- reversing course only after threats of a lawsuit. This past October, members of the region's 8,000-person Bosnian community, many of whom are Muslim, were not allowed to build a cemetery in Snellville due to residents' concerns that the project would decrease property values and increase traffic.

Atlanta-based human rights attorney Azadeh Shahshahani, the legal and advocacy director for Project South, said the objections raised by these opponents over the past several years, including public safety and noise concerns, are "an attempt to disguise" discrimination in order to suppress the free exercise of religion for peaceful Muslims.

"There's an attempt to portray Muslims as 'other,'" Shahshahani said. "When you have that type of rhetoric being espoused [at the national level], it's creating an unwelcome community for Muslims in what is their home. These are really scary times."

Such tensions, which have boiled over in similar meetings nationwide, were enough for Islam to skip the town hall meetings Monday night. During those meetings, some of the mosque and cemetery opponents voiced xenophobic sentiments. Yet a few people like Christy Blanchford, a Covington resident and physician, objected to the denial of the Muslim group's constitutional rights.

"Everyone should have the right to assemble peacefully," Blanchford said at one town hall meeting. "I work with a lot of Muslim physicians and I have a lot of Muslim patients. They are embedded here in the community. They should have a place of worship close to where they work and home."

Ultimately, Shahshahani said, Newton County's moratorium may violate the federal law known as the Religious Land Use and Institutionalized Persons Act (RLUIPA), which makes it illegal for local officials to place a "substantial burden" on the religious exercise of houses of worship. Newton County commissioners, who hosted and attended Monday night's meetings, did not return CNN's multiple requests for comment.

"This is not about public safety, this is about prejudice," said NAACP Georgia Executive Director Francys Johnson. "Georgia prejudice is as old as Georgia peaches."

Given the threat of discrimination, civil rights advocacy groups including CAIR and the NAACP last week urged the US Department of Justice to investigate Newton County's actions. Mitchell said Tuesday the Justice Department had agreed to review their request, but that he hoped officials there would reverse the moratorium prior to a potential investigation. In addition, Mitchell announced he would visit Newton County to hold an "Islam 101" meeting in the near future.

In the face of prejudice, however, Islam does not wish to fight back against the people who live near the potential future site of his mosque and cemetery. Instead, he hopes to embrace those wary of his congregation with a message of peace -- starting with a lunch invitation Tuesday afternoon at the Doraville mosque.

"We love them, we respect them, we need to be patient," Islam said. "If you have doubts, we welcome you. If we open a dialogue, we hope they will see that the rest of people can live side by side with us. We think they'll eventually be our neighbor."