A Michiana bakery gets an upgrade 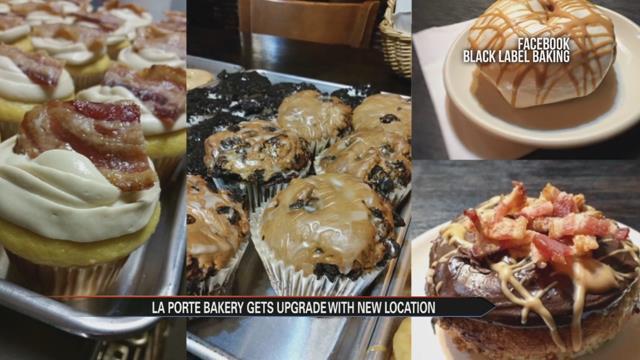 A Michiana bakery is being upgraded to restaurant status.

“Just want to do something to make our mark in our hometown,” said James Conlin.

Thresh is a Navy vet who used to live in Washington.

“Took me a while to figure out what I wanted to do and beer was a big factor,” said Thresh. “Started baking stuff with beer in it, it was really good. A hit around the neighborhood.”

A high school reunion reconnected Conlin and Thresh and from there a business would soon be formed. One day they grabbed a beer and got to talking about their big dreams about what they’d do if they ran a restaurant.

“Being big guys we like our food,” joked Thresh.

“Started making doughnuts using beer as a main component, said Conlin. “We bake our doughnuts we don’t fry them. So they’re quite a bit different then what you’d find at Dunkin Donuts or someplace like that. All of our stuff is baked. We won’t even have a fryer in the shop.”

“Black Label is pretty popular in the spirits industry,” said Conlin.  “It gives that air of elegance.  A little bit higher standard of quality.  And that’s one of the reasons why we wanted to name the company after that.”

Since its creation Black Label has been operating out of the coffee shop known as Temple News Agency which is owned by Thresh’s wife’s cousin.  But now the baking duo is moving into their own kitchen located in downtown La Porte next to Mucho Mas.

“The intent was to always open a shop for Black Label specifically,” Conlin said.  “That was just a springboard for us to kind of help us get our recipes kind of ironed out for the pastry side and get people exposed to what we’re doing.”

In addition to moving to a new location they will begin to offer a lunch service by using bread that they bake in house.

“Pretty much any baked good you’re going to get from us is going to be baked by us,” said Conlin.

However, they do have a source for pies and bagels that will come from local places.

“So cappuccinos, espressos, those sorts of things,” Conlin said.

One thing that sets them apart from other restaurants in the area is time.

“A lot of restaurants understandably so want to serve as fast as they can but there’s not a lot of care into the handmade or the long term,” said Conlin.  “Our cinnamon rolls for instance take about three hours to make for a dozen. It’s not a quick process. You’re not going to come in and get a can served to you.”

It may be empty for now but soon their newly acquired space will be filled with hungry customers.

“We want to have a pretty transparent presence in La Porte so we want people to give us feedback,” said Conlin. “We want to respond to that feedback, I think that speaks to the positivity level. We listen to our customers we want to know what you enjoy, what you don’t enjoy. What we make is it good?  Do you like it?  If you don’t like it let us know. We want to have that response that communication back and forth with our customers. And we hope you come check us out.”

With all of the new additions Black Label will also take on special orders.

Black Label Baking will have their soft open this Friday just in time for Valentine’s Day.

Their official grand re-opening will be in the very near future.