A new year marks a new beginning for Goshen's mascot 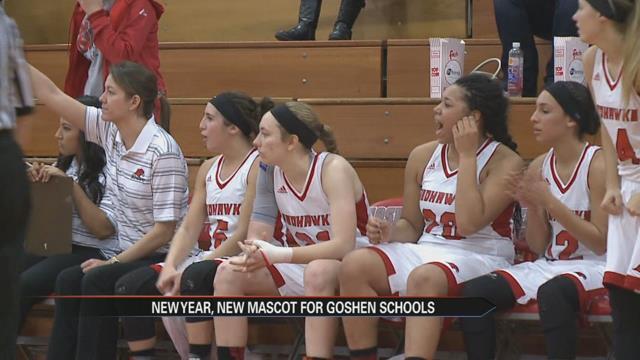 A new year calls for a new mascot at Goshen Schools.

The girl’s varsity basketball team was the first to rep the new Redhawks mascot.

And fans say their performance on the court raised quite a bit of school spirit.

Some fans say it felt like a new team hit the court during the tournament.

And even with a new mascot on display just about everywhere in Goshen’s main gym,  the change fans saw might be more than just t logo.

“They did really good on driving and doing fast breaks and they did tough defense,” said Hailey Mast, Goshen Middle School student.

“I totally agree with that they had a lot of good steals so it’s adding to it,” said Lizzy Karktoa, another Goshen Middle School student.

Mast and Karktoa will soon take their talents to the courts of Goshen High School next year.

They’ll be starting fresh with the Redhawks mascot and aiming to raise the bar set high Saturday by the current team.

“Being able to play with older kids and the coaching staff is really cool so that’ll be fun,” said Mast.

The school district retired the former Redskins mascot back in July.

The new Redhawks logo was chosen in November.