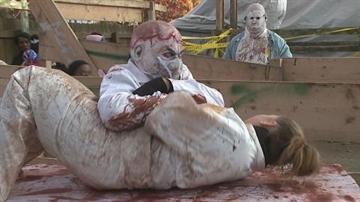 SOUTH BEND, Ind. – Shrieks and screams could be heard up and down Sheridan Street as the Pipp family and their friends hosted their annual Halloween scare house. The normally free event asked for donations this year, the proceeds going toward juvenile diabetes research.

In just a few short hours, and with no advertising, the group raised $166 with more in pledged contributions from several city leaders who could not attend the event Monday night.

It was a success, said Joe Pipp, who made the decision to support diabetes research because the disease has touched his family. Joe’s sister, Samantha, has grown up struggling with diabetes. “It’s tough for her to have diabetes; she struggles with it all the time. [Samantha’s] getting to a certain age where it fluctuates so much up and down; it just affects her physically and mentally,” said Joe Pipp.

Samantha has been participating as a performer in the scare house for years because going trick-or-treating was counterproductive to her trying to regulate her blood sugar. She says this year is special for her because she feels like she is doing something to help other kids like herself. “It’s a lot to go through, especially like when you’re really young, and you have to like give yourself shots,” said Samantha Pipp.

The set up at the home was elaborate with several sections laid out for maximum scare opportunities. A host of performers more than a dozen strong played their creepy, scary and at times gory roles brilliantly; if the screams of children and adults could be an adequate measurement of such things.

Many exited the twisted path of horror that snaked through the Pipp’s backyard only to get right back in line to have another go at being startled. Others were herded down the street by a performer wielding a modified chainsaw screaming at their heels.

The group is ambitious, and after seeing steady growth in turn out over the past few years,  are preparing to launch a Facebook page for the attraction and hope to continue to build it up. They hope to keep seeing large crowds of people eager to be scared out of their wits, who don’t mind supporting sick kids along the way.