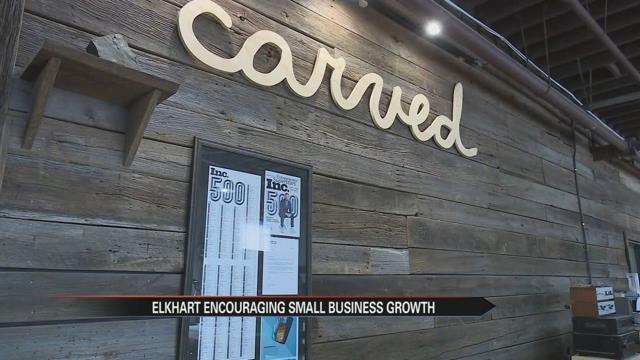 Four small businesses are taking advantage of affordable office space being offered through the Chamber of Commerce.

The program known Launch Elkhart started in August and is giving entrepreneurs a chance to save money on rent while they start up.

Another small business in Elkhart, Carved says the city has been a good place for them to set up shop.

Carved’s office is located in a building off West Crawford Street. They use the space to design and make wooden phone cases.

Eric Richardson, the General Manager of Carved, says September has been a busy month.

On Thursday the team was packing boxes and filling orders fast.

“Yea we had a day this week where we shipped just over 400 [cases],” says Richardson.

At Carved they engrave designs with laser machines and piece together one of a kind cases that are sold all over the world.

“The growth has been phenomenal out of control,” says Richardson.

There is a frame in the office highlighting Carved’s sales growth of 1,479.9 %.

“I’m from the area I grew up in Syracuse and to work that close to your hometown for a company that has that type of reach is really cool,” says Richardson.

The entrepreneurial spirit use to make each unique phone case is something Elkhart Mayor Tim Neese wants to grow in Elkhart.

“We want to keep them here we want to see them grow and be very successful,” says Mayor Neese.

Mayor Neese along with the Elkhart Chamber of Commerce is renting out work space at the Chamber ranging from $150 to $250 a month.

The leases have a two year cap intended to give entrepreneurs time to get their business off the ground and hopefully into an Elkhart store front.

“We are open for business in the city of Elkhart and we want to be a beacon or mechanism for small business that maybe didn’t have the money for start up cost,” says Mayor Neese.

Carved has some advice for other entrepreneurs and says doing business close to home has worked out for them.

“We love it we are having a ton of fun to be here in Elkhart to come to work at a place like this and doing this type of business is a lot of fun,” says Richardson.

There is still Launch Elkhart space available. For more info on how to apply click here.