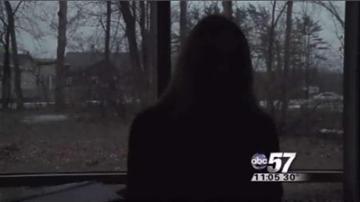 SOUTH BEND, Ind. -- Despite objections from the Prosecutor's Office, a Niles man walked free on Wednesday, even though some fear that he is a dangerous man.

Randy Jones pleaded guilty to one count of a felony residential entry charge and one count of invasion of privacy. However, against the prosecution's objection, Judge Roland W. Chamblee, Jr. released Jones from jail to walk free until his sentencing in April.

ABC 57 News sat down with the woman who said she was victimized by Jones, and she is speaking out for the first time publicly about the long and painful history of abuse.

For the last year and half, this woman, who did not want to be identified, said she has been beaten, raped and has received death threats from Jones. She said Jones has not only threatened to kill her, but her kids, her family and even some of her friends. It was a friendship that started on Facebook, but turned into a social networking nightmare.

At first, it started out like any other relationship. The couple, who knew each other through mutual friends, started chatting online and then they eventually started dating.

The woman said Randy Jones was the perfect gentleman, but soon the affection turned to obsession and then to jealous fits of rage. " I have never had somebody hit me, call me names, steal from me. At this point I knew I was in trouble. The abuse started at Christmas, at first it started with the constant accusations, with hundreds of phone calls and text messages throughout the day and night".

She said Jones eventually started beating her. She tried to get away from him, but it only made it worse. "He took his fist and knocked me unconscious, and all I saw was a white light. When I woke up, he was on top of me  -- raping me, and he had his hand over my mouth, and I couldn't breathe, and my hair was laying on the floor where he had pulled it out of my scalp".

Fearing the next time Jones would kill her, she filed a restraining order against him. He violated the order, showing up at her home and holding her hostage again. Though, this time she said she was prepared. She had bought a gun and had an alarm system installed with a panic button that she kept by her side at all times.

"The panic button saved my life that day. He beat me several times and left me laying on the floor in a pile of my vomit, urine, and feces".

She was able to press the panic button and minutes later both police and the SWAT Team had her home surrounded. Jones was arrested and charged after police caught him trying to flee the neighborhood.

Jones would eventually have his bond revoked for violating the restraining order and would be put behind bars.

Yet against the prosecutor's objections during Wednesday's court appearance, Judge Chamblee let Jones walked out of jail a free man after pleading guilty to the charges. Now the woman is worried about what could happen next.

Jones pleaded guilty on Wednesday to felony residential entry and invasion of privacy. The Prosecutor's Office told ABC 57 that there just was not enough evidence to take Jones to trial on criminal confinement charges. Yet the woman says she could not disagree more and now she just hopes she can just stay safe until Jones' sentencing in April.